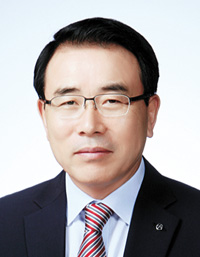 Cho Yong-byoung, incumbent CEO at Shinhan BNP Paribas Asset Management, has been nominated to be the next president and CEO of Shinhan Bank, Shinhan Financial Group said Tuesday.

The group’s committee on developing subsidiaries’ management said it chose the 58-year-old Cho, who has international experience, as the next leader of Korea’s top bank.

Former CEO Suh Jin-won was previously expected to serve a second term, but resigned recently due to illness.

Suh was at work for one day at the beginning of the year and has been absent since then after he visited a hospital, thinking he had a mild cold. It turned out to be pneumonia. The committee wanted to act quickly to fill his long-vacant post.

“The nominee’s experience running the asset management firm and overseas business will contribute to finding new growth engines for the bank,” the committee said in a statement.

Cho also is an expert on human resources management.

Since the new bank CEO is likely to become a candidate next year for the post of chairman of the country’s largest financial group, the announcement has grabbed the attention of the public as well as people in the industry.

Shinhan has been the No.1 bank in terms of net profit for the past five years.

The group’s banking subsidiary posted 1.45 trillion won ($1.3 billion) in net profit last year. The group recorded about 2.1 trillion won in net profit in the same period. Amid continuing low interest rates, Shinhan could keep its place as the industry’s top bank, since it remained scandal-free last year, unlike KB Financial Group, which had to deal with a boardroom feud, and Hana Financial Group, whose labor union continues to oppose an early merger with KEB.

However, since an internal battle between the former bank CEO and holding company CEO severely damaged the financial group’s reputation and structure in 2010, Shinhan has been extremely careful about the most recent nomination.

In September of that year, Lee Baek-soon, the CEO of the bank at the time, sued Shin Sang-hoon, CEO of Shinhan Financial Group, accusing him of embezzlement and breach of trust.

The lawsuit was allegedly the result of a dispute over the nomination of a successor to then-chairman of the group, Ra Eung-chan.

As the case became more serious, all three top managers vacated their posts.

Other employees and executives also quit amid fallout over the incident. Insiders hope the nomination of Cho will bring an end to the dishonorable scandal.

Although the incident took place half a decade ago, it still haunts the financial group as there is unspoken tension between supporters of former Chairman Ra and Lee against Shin.

“Our employees have kind of a trauma,” said an insider. “Whether the management is willing to heal the trauma or not should be reflected in the latest appointment.”

Cho was considered a likely candidate for the Shinhan Bank CEO post because he is less connected to the scandal than other leaders at the bank.

Reportedly, Han Dong-woo, the current chairman of the group, and Korean-Japanese shareholders of the financial institution selected Cho for that reason.

The legal battle between Lee and Shin is still ongoing, and the recent appointment could affect the result.

Shin was sentenced to one year and six months in prison and two years of probation in the first trial. But in the second trial in late 2013, he was convicted of embezzlement on just one out of six alleged cases and was levied a 20 million won fine in a reversal of the previous ruling.

He was charged for embezzling about 260 million won out of the 1.5 billion won that was allegedly stolen.

Lee, who sued Shin, was handed the same prison term because he was accountable for the incident as chief of the bank.

If the Supreme Court accepts the second ruling, Shin will be able to make a comeback at the financial institution. In that case, other former and current executives who were directly or indirectly involved in the embezzlement may have to take responsibility. The new CEO could be included.