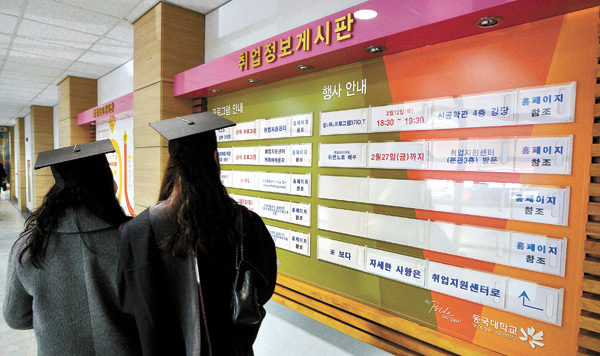 Dongguk University students pass a job bulletin board at the school campus in Seoul as they celebrate their graduation Tuesday. A survey by Job Korea showed that companies are cutting back on hiring new recruits, making the already narrow job market for young people even more difficult. [NEWSIS]

The prospects for entry-level workers getting jobs at large companies are the worst in five years, according to a job market research company.

Job Korea said Tuesday that a survey of 500 top companies in terms of revenues showed positions for entry-level job seekers will shrink to 14,029, down 10.1 percent from a year earlier.

That is an average of 80 positions for entry-level workers at each company.

It nose-dived to 15,610 last year and is will decline further this year.

The survey also showed that of the 316 companies that responded, 79.9 percent have finalized their recruitment plan for this year and only 69.4 percent of them, or 175, are hiring people fresh out of college.

By industry sector, 70.8 percent of companies engaged in logistics and trade answered they would employ college graduates as entry-level workers, followed by the petrochemical industry at 70 percent, electricity and electronics at 61.3 percent and finance at 61 percent.

In machinery and metal companies, only 52.6 percent have reserved spots for new workers and the situation in automobiles, transportation, shipbuilding and heavy industries was worse.

Notably, shipbuilding and heavy industries will see its number of entry-level recruits reduced by 23.5 percent - the largest among all industries.

Leading conglomerates will begin their first-half recruiting process early next month. LG will be the first to start on March 4, with plans to hire some 2,000 entry-level workers from college graduates. It has 12,000 positions open this year, which includes spots for experienced workers.

Hyundai Motor Group and SK will start recruiting early next month. Samsung will start accepting applications in mid March and will administer its proprietary test, called the SSAT, on April 12.

It will be the last time that anyone with a college GPA of 3.0 will be able to take the test. Starting in the second half of this year, candidates will only be allowed to take the exam after passing a work-related essay test.

Youth unemployment has become a major concern in Korea. According to Statistics Korea, in January the unemployment rate for people between the ages of 15 and 29 was 9.2 percent, the highest in seven months.