Land price rise of 4% is highest in seven years

Land price rise of 4% is highest in seven years 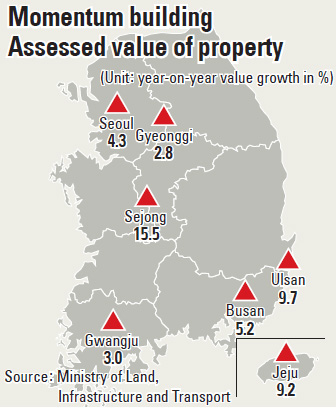 The Ministry of Land, Infrastructure and Transport announced the statistics on assessed values of land as of Jan. 1, by selecting 500,000 sample plots out of about 32 million plots in the country.

Naju, a farming city in South Jeolla, recorded the highest rate of increase year-on-year, 26.96 percent, thanks to the government’s full-scale relocation project of some state-run organizations including Korea Electric Power Corporation (Kepco).

The so-called “Gwangju and South Jeolla joint innovative city plan” aims to relocate 16 government organizations to the southwestern city in order to boost the local economy and build up infrastructure.

Kepco, one of the big public bodies being moved, opened its headquarters in Naju on Dec. 1, 2014, with approximately 1,500 employees working in it. Under the plan, a total of 6,700 employees of 16 government bodies are expected to move through the end of 2016.

The next briskest rate of growth was in Sejong City, which had a 15.5 percent rise. An increasing number of government officials, reporters and workers are moving to the newly-developed Sejong Government Complex, which is home to a total of 16 government ministries and agencies.

The most expensive plot of land in Korea was a Nature Republic store on Myeong-dong 8-gil, central Seoul, valued at 80.7 million won per square meter ($6,600 per square foot). The 169-square-meter (1,819-square-foot) plot has ranked at the top of the nation’s land prices for the past 12 years.

All of the top 10 priciest plots were in Myeong-dong, the highly populated shopping district in downtown Seoul.

Although Seoul recorded 4.3 percent rise in land values for the year, close to the national average, the prices of some major commercial areas in the capital surged, such as in Sinsa (15.23 percent), Itaewon (10.2 percent) and Gangnam (9.47 percent).

The lowest rise was in Goyang, Gyeonggi, at minus 0.04 percent, the report said, due to falling farmland prices and depressed commercial businesses.

The cheapest land in the country was natural forest in Gimcheon, North Gyeongsang, at 145 won per square meter.