Most workers can expect raises

Most workers can expect raises 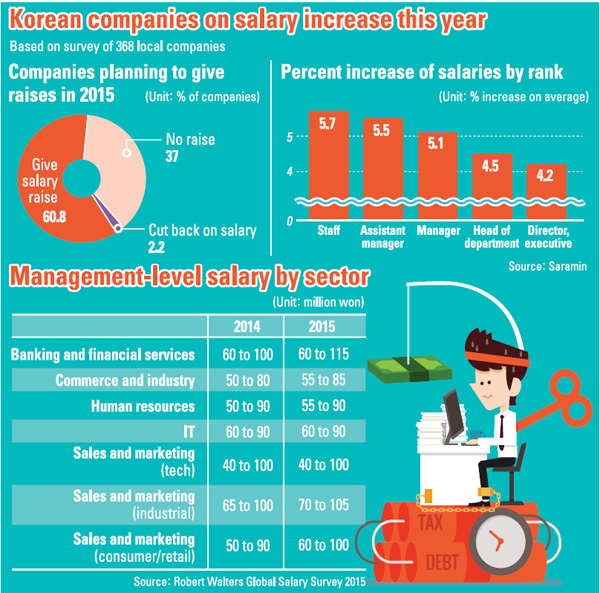 Despite the sluggish economy, 60 percent of Korean companies said they will raise employees’ salaries this year, according to a survey.

According to a recent poll by online recruitment and job portal Saramin, 61 percent of the 368 companies polled said they would give raises.

The survey respondents said they will raise salaries by an average of 5.1 percent over the last year and about 61 percent companies said the raise will be at a similar growth rate. Twenty-eight percent said they would give a larger raise than last year, while 11 percent responded that they would lift salaries by slightly less than 2014 due to poor annual performances.

However, most of the raise will go to low- and mid-level employees rather than management.

By industry, financial, luxury goods and pharmaceuticals in Korea are expected to refrain from hiring entry-level employees due to global economic uncertainties and low domestic consumption sentiment, global recruitment company Robert Walters said in its annual Global Salary Survey. But the Australia-based company forecast that working-level employees in these industries will still receive a raise this year.

Banks and financial services are expected to limit hiring despite signs of recovery in the industry this year. As a result, the two industries will keep salary levels similar to last year, at between 60 million won and 115 million won ($54,100 to $103,700), according to Robert Walters.

The IT industry will be hiring, but existing employees can expect their salaries to stay at between 60 million to 90 million won.

“Because IT companies are expected to expand investment to add cloud technology to their business, we forecast that there will be active hiring particularly involving cloud solution developers and system and program developers,” the recruitment company said in an analysis.

Insiders say that the nation’s leading tech company Samsung Electronics has already agreed with its union to freeze the salary of regular employees and executives.

Salaries will also not change in technology sales and marketing, staying between 40 million to 100 million won.

But as recruiting specialists play a bigger role due to the struggling economy, Robert Walters forecasts human resource consultants and industrial sales and marketing specialists will see their salaries rise by almost 10 percent this year, to between 55 million won and 85 million won.

Sales and marketing specialists in consumer goods and retail are estimated to receive a raise of 10 million won this year, to between 60 million to 100 million won.

“In particular, recruiters in these sectors showed high interest particularly toward digital marketers as retailers look to encourage consumers to shop online via mobile devices,” said the Australian recruitment firm. “We expect that competent digital marketers will see a salary increase of up to 20 percent.”