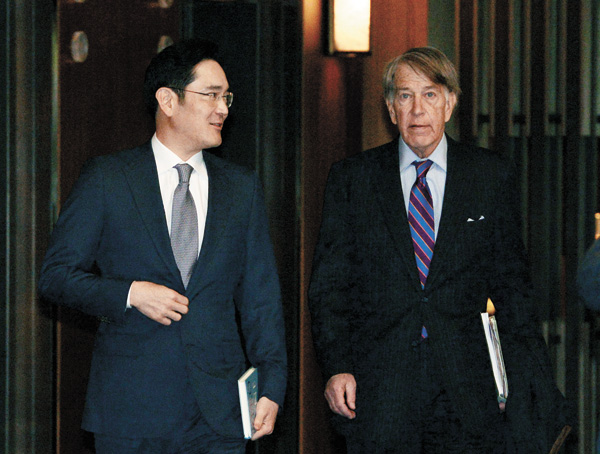 The only son of Samsung Chairman Lee Kun-hee visited Thiel on Tuesday morning at the Hotel Shilla in central Seoul for a conversation that lasted about an hour, according to industry sources.

Samsung declined to provide details about the meeting.

The encounter comes at a time of growing speculation over Samsung launching its own mobile payment service. The top-selling smartphone producer purchased Boston-based mobile wallet solutions provider LoopPay last Wednesday. The acquisition is considered an initial step for Samsung to compete with Apple Pay, which was launched in October.

Thiel and several co-founders sold PayPal to eBay in 2002 for $1.5 billion and the billionaire entrepreneur has since been a robust angel investor and hedge fund operator. He is also known for writing the 2014 best seller “Zero to One: Notes on Startups, or How to Build the Future.”

He gave a lecture to students hoping to launch their own start-ups on Tuesday at Yonsei University and is scheduled to meet today with some 20 workers and experts in IT at Seoul Convention Center in Samseong-dong, southern Seoul.