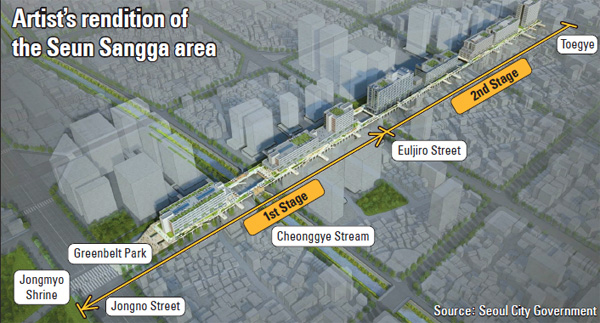 Central Seoul, with a variety of historic and entertainment districts, has emerged in recent years as a world-renowned tourist attraction.

But tourists and city residents alike still seldom make time to visit Seun Sangga, a half-century old shopping and residential district that stretches over a kilometer between the Jongno and Dongdaemun areas.

As the country’s first commercial and residential complex, the neighborhood once flourished in the 1970s but slowly began to decline a decade later with the establishment of the Yongsan Electronics Market and the massive redevelopment of southern Seoul.

So in an attempt to revitalize the district and surrounding area, the Seoul Metropolitan Government on Tuesday disclosed a comprehensive plan to turn the depressed shopping ally into the city’s newest tourist attraction that will connect other tourist attractions like the Jongmyo Shrine and Mount Namsan.

“The first step in the project would be to restore the elevated footpath and reconnect the buildings along the Cheonggye Stream,” said Kim Hae-seong, who heads the city’s Historic City Center Regeneration Division.

“The second-story passageway that once connected the buildings over the Chonggye Stream was removed when former Seoul Mayor Lee Myung-bak restored the stream in 2005. That’s considered one of the reasons why fewer visitors have come to the district.”

The project is expected to be divided into two stages, the first of which will see the renovation of the northern half of the area, and see the elevated footpath reconnected.

The local government’s plan would remodel the walking decks of buildings and connect them in order to establish a pedestrian route so that visitors can eventually walk from the Jongmyo Shrine in Jongno District to Mount Namsan.

The remodeling process of the first stage is to begin in November this year and finish at the end of 2016.

The city government has yet to specify the second stage of the plan for the other half of the district, which it will outline following discussions with shop owners and residents.

The city government is currently working to revitalize the area with support from the local community and has set up a forum with more than 20 experts tasked with conceptualizing cultural and artistic events to attract more visitors. It is also considering giving incentives to start-ups in the district.

“Seun Sangga has architectural value but is also historically and culturally important,” said Lee Je-won, who heads the Urban Regeneration Headquarters. “I hope the district’s renovation will revitalize the surrounding area and become a new city landmark.”