Evian champion and still a rookie

Evian champion and still a rookie 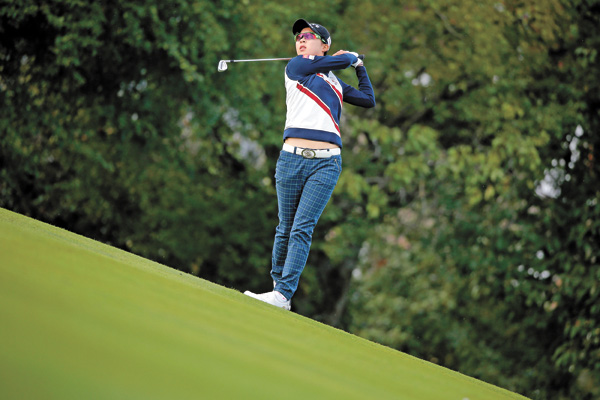 For 19-year-old Kim Hyo-joo, Honda LPGA Thailand is shaping up as an unforgettable event as she makes her debut as a member of the Ladies Professional Golf Association (LPGA) Tour.

The event, which has total purse of $1.5 million, starts today at Siam Country Club, Pattaya Old Course, in Chonburi, Thailand. Sixty of the top LPGA golfers as well as 10 invited players will compete at the fourth LPGA event of the season.

Kim will tee off with Stacy Lewis and Azahara Munoz.

In September, Kim was invited to play in the Evian Championship and shocked the golf world by beating Karrie Webb of Australia. On the first day, she shot a 10-under 61 for the best round ever at an LPGA major tournament.

Her triumph at the Evian Championship earned Kim a full LPGA membership for this season, but she did not play in the first three tournaments.

But in an interview with JoongAng Ilbo on Tuesday, Kim repeatedly used words like “really” and “very much” in reference to her winter training.

“I have done physical training and practiced shots more than at any other time,” she said. “I even suffered muscle aches, as I sometimes overdid it.”

There’s a reason why Kim, who started playing golf at the age of 6, is confident about her chances at Honda LPGA Thailand: She left for Khao Ya on Jan. 11 and has been training hard in Thailand since.

She began her daily routine at 6 a.m., heading to the golf course to play a round. From 2:30 p.m. until the evening, she focused on her short game and practicing specific shots.

After eating dinner, she trained to boost her stamina before wrapping up the day with swing practice.

“In the early phase of winter training, I focused on shots and later concentrated on my short game,” said Kim. “I worked out every day, and although it really made me tired, I felt proud when I noticed one day that I had gained an abdominal muscle.”

As Kim gets stronger, her distance gets longer. Last year on the KLPGA tour, she was 21st in average driving distance at 256.4 yards. But now, the golfer said she can use higher-number clubs because her shots go farther.

“Now my iron shots are longer - about a half-club more - while my wood distance has gained about a club more,” said the native of Wonju, Gangwon. “It allows me to swing more comfortably.”

Another change is her vision. In December, she had laser eye surgery to improve her sight.

Previously, Kim wore contact lenses when competing in tournaments. “I can see things very well,” she said, “better than when I wore contacts.”

Kim, who is sponsored by Lotte Group, expects her condition will be 100 percent when the tournament starts today.

“I’m well prepared in almost all aspects, including my stamina and short game, but debuting on the LPGA Tour still leaves me dazed,” she said. “I still can’t believe this.”

This season, Korean golfers have started strong, and Kim says that is “good stimulation” for her.

“I have sent congratulation messages to them,” said Lee. “They did it, so I feel like I can do well. I also want to win a title.”

Established in 2006, the Honda LPGA Thailand has been good to Korean players. In the inaugural event, Han Hee-won hoisted the championship trophy. Shin Jiyai won in 2009 and Park In-bee in 2013. Park also was the runner-up last year.

But Kim’s road to victory in Thailand will not be easy, The LPGA has announced that 16 of the top 20 players in the world will compete, including defending champion Anna Nordqvist of Sweden.

Meanwhile, 17-year-old Lydia Ko, the world No. 1 who won the ISPS Handa Women’s Australian Open last weekend, passed up the event to play in the New Zealand Open, which is part of Ladies European Tour.

Kim, ranked eighth in the world, is expected to contend for LPGA Rookie of the Year along with fellow Koreans Kim Sei-young and Jang Ha-na, fourth and eighth, respectively, on the money list.

Yet she is more concerned with playing her best than winning titles.

“Golf is a competition with myself, I don’t think I need to be in a hurry,” she said. “Instead of setting goals like collecting a trophy or being rookie of the year, what’s more important to me is to complete the season in good standing.”