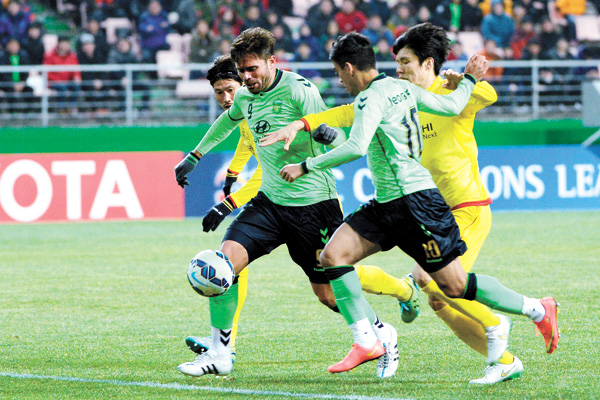 Jeonbuk Hyundai Motors’ Brazilian attacker Edu, center left, and Leonardo chase the ball in their match against Kashiwa Reysol during the first Group E match in the AFC Champions League on Monday. The match ended 0-0. [NEWSIS]

Korean football clubs got off to poor start on the first day of the Asian Football Confederation (AFC) Champions League, as K-League champion Jeonbuk Hyundai Motors and Korean FA Cup winner Seongnam FC both failed to get a victory.

Jeonbuk played to a scoreless draw against Japan’s Kashiwa Reysol in the Group E opener on Tuesday night at home, while Seongnam was beaten by Thai Premier League champion Buriram United 2-1 in its Group F match the same day.

The 2006 champion Jeonbuk was especially eager to collect its first win against Kashiwa as it has not beaten a Japanese club in any of its past four meetings. Even without formidable striker Lee Dong-gook, who could not play due to a thigh injury, Jeonbuk dominated the game with its trademark attacking football, but it just wasn’t enough to score.

Shots from midfielder Lee Jae-sung and defender Cho Sung-hwan made it across Kashiwa’s goal line, but both occasions were ruled as offside. Lee even hit the crossbar in the 26th minute.

“We drew a match that we should have won,” Jeonbuk Manager Choi Kang-hee said afterward. “Drawing 0-0 at home is no different than a loss.”

“There were many offsides as the players were too passionate,” Choi said. “It will be difficult to upgrade our level of play to 100 percent, but I believe we will be better as time goes by.”

But Jeonbuk still fared better than Seongnam, who didn’t score any of their own goals. In their away match against Buriram, the 2010 champion was already trailing 2-0 in the 20th minute after goals from Prakit Deeprom and Gilberto Macena.

Seongnam’s only goal also came from Buriram when Narubadin Weerawatnodom scored an own goal in the 87th minute.

“As I expected, the first 15 minutes are critical, but we just couldn’t overcome it,” Seongnam Manager Kim Hak-beom said. “Since this is just the beginning, we should be prepared for the next match instead of getting disappointed.”

K-League clubs are usually dominant in the AFC Champions League. Since 2003, they have won the Asian international club competition four times and came in as the runner-up three times.