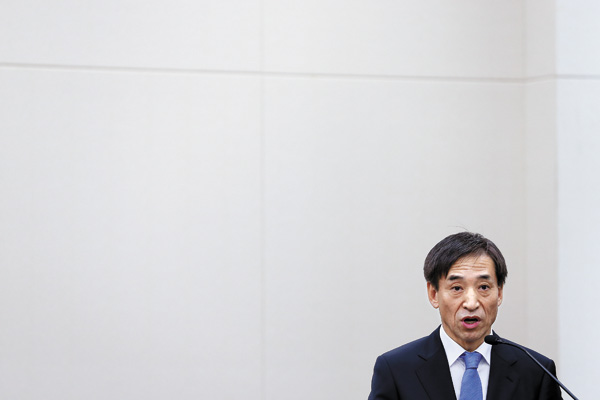 Whether to lower or keep the key interest at its current level must be the biggest question on the mind of Lee Ju-yeol, governor of the Korean central bank, as the world inadvertently enters a currency war.

In fact, the burden on the Bank of Korea governor has been mounting since Australia joined in the race earlier this month to defend against the appreciation of its currency. The interest rate cut has been a rising trend among countries since the second half of last year. The eurozone and Japan have decided to keep supplying liquidity in their markets, which has been pushing down the value of their own currencies, while China cut its interest rate by 0.4 percentage point in November.

According to the Korea Center for International Finance, in the first two months of the year, 10 countries have joined in the race by lowering their interest rates - Romania, India, Peru, Sweden, Egypt, Denmark, Turkey, Canada, Russia and Australia.

Singapore announced on Jan. 28 that it will adjust its monetary policy to decelerate the pace of its currency appreciation. 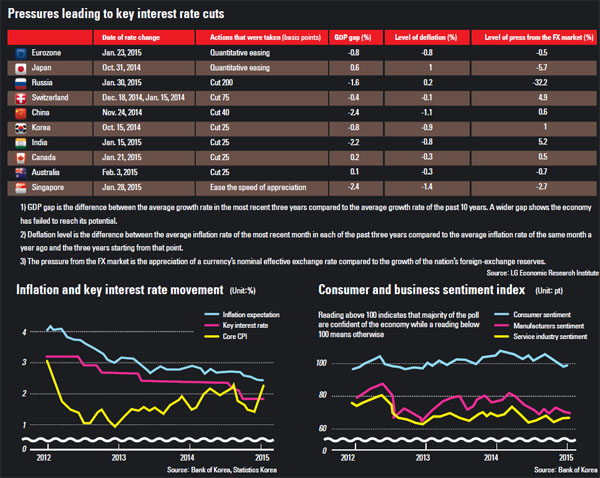 “Most of the countries that have been lowering their interest rate lately are those that have trouble firing up vitality in their economy while under the pressure of low inflation,” said Choe Moon-bak, a senior analyst at LG Economic Research Institute. “Other than Norway and Japan, most of the countries’ economic growth is below their potential or they are dealing with progressing deflation.”

Choe said that for so many countries to opt for a loose monetary policy in such a short period of time is unusual, adding that the additional quantitative easing in the European Union and Japan combined with low crude prices seems to have put pressure on them to cut their interest rates.

Will the rate cuts stop soon? Some experts say it’s not likely. In fact some countries like Russia will likely make additional cuts as the trend expands to other economies.

“In the case of Europe, there is a high possibility that the lowering of the interest rate will expand to Eastern European countries that are facing difficulties due to the lagging economy,” said Choe at the LG Economic Research Institute official.

In Asia, Hungary, Israel and Taiwan are also expected to make cuts.

It even seems that the United States, intentionally or not, has joined the race after the Federal Reserve signaled to the market that it will maintain its’ near-zero rate for the time being.

The Fed’s Chairwoman Janet Yellen on Tuesday local time took a dovish position, saying the U.S. central bank might maintain its near-zero interest policy for the next “couple” of meetings.

“The FOMC’s assessment that it can be patient in beginning to normalize its policy means that the committee considers it unlikely that economic conditions will warrant an increase in the target range for the federal funds rate for at least the next couple of FOMC meetings,” Yellen said during her biannual testimony on Capitol Hill.

During a Q&A session, Yellen noted that if the Fed raises the rate too soon, it risks undermining the recovery, adding to the understanding that there will not be an immediate hike.

Several market experts predicted earlier that the Fed will remove the word “patient” at their next meeting in March. Many projected that the Fed would then raise the interest rate, which has been kept low for six years, as early as July.

With even the United States keeping its key rate low, there is growing pressure on the Korean central bank to take action, particularly due to the recent appreciation of the won, which has undermined the nation’s export competitiveness.

According to a study by the Bank for International Settlements, Korea’s Real Effective Exchange Rate (REER), an index used to estimate the relative strength of a currency compared to a selection of other currencies, was 114.4 points in January. This is the highest since February 2008, when it was at 118.8. The higher number shows a comparatively higher value. During the same month, the euro reached 91.3 on the index while the yen was 70.8, its lowest since 1994.

Last year, Korean exports grew 2.8 percent, which is slower than the 3.3 percent growth in the economy. The only other times that exports grew at a slower pace than the nation’s GDP were in 1989, 2001 and 2009.

The strength of the won will likely do further damage to the nation’s export industry as other currencies depreciate against the U.S. greenback.

“In February’s press meeting held after the monetary policy committee decided to freeze the interest rate, Gov. Lee took a more dovish position than in January,” said Kim Min-ku, an analyst at Kiwoom Securities. “While the low growth, low inflation continues, exports are also slowing down and therefore there are continued expectations of another rate cut.”

But the decision to lower the rate, which the market expects will happen in March or April, will not be easy for the head of the BOK.

“In some ways [the testimony by Yellen] has increased uncertainties,” Gov. Lee said on Wednesday in his monthly meeting with top economists.

Lee was referring to uncertainty that has come from Yellen’s hinting of no longer using the word “patient” in her statements in future Fed meetings.

Many experts have relied on the word to read the direction of the U.S. central bank’s monetary policies. Previously when Yellen used the word “patient,” the market considered it to mean the Fed would maintain its policy direction for some time.

Even market experts are cautious over whether the BOK should lower the interest rate or keep it at the current level.

“There have been persistent arguments over the need for additional monetary policy easing considering the lagging economic growth and the low inflation rate,” said the LG Economic Research Institute analyst. “But at the same time, there are factors that make it difficult for another rate cut, including the expansion of household debts as well as the possibility of a massive exodus of foreign capital caused by the difference in interest rates with other countries. It wouldn’t be easy for the BOK to decide to further lower the interest rate from the current all-time low of 2 percent.”

However, the researcher said that if the Korean central bank decides to lower the key rate, now would be the perfect time in order to tackle the unprecedented low inflation and revitalize the economy.

Some analysts are projecting that the central bank might maintain its current 2-percent interest rate throughout the year.

“The fact that all of the members on the monetary policy committee unanimously agreed to hold the interest rate for the fourth consecutive month in its February meeting shows that even within the central bank there are no assertive movements to make an additional cut to the interest rate,” said Chae Hyun-ki, a KTB Investment and Securities economist. “It reaffirmed the central bank’s position that it should maintain an observant stance for the time being as it monitors the effect of the two rate cuts made in the second half of last year.”

Chae also noted that it seems the central bank thinks there is no need for an additional rate cut since it doesn’t see deflation as a possibility and does not think the slow pace of recovery warrants urgent action. He said this also reflects the change in the central government’s policy changes, where instead of pushing for monetary easing, it is now more focused on making structural reforms to bolster the economy.

Unlike in the second half of last year, when Finance Minister Choi Kyung-hwan and other politicians pressured the central bank to lower the key interest rate, this year, they have remained relatively silent on the issue.

Other than President Park Geun-hye, who mentioned stronger cooperation between the BOK and central government, no top government brass has stressed the need for a rate cut.

However, some analysts have questioned the sensibility of relying on monetary policy to bolster the economy. There are doubts over how effective a low interest rate is in encouraging spending, and rapidly rising household debt has been an undesirable side effect.

Experts say the core problem lies in the poor consumer sentiment. According to the Bank of Korea on Wednesday, consumer sentiment in February was 103, one point higher than last month. The index has failed to climb back up to 105, which was last recorded in May, a month after the Sewol ferry sinking. The tragedy that claimed the lives of 300 or so passengers was huge to the Korean economy, as consumer sentiment quickly dampened.

Despite the government’s efforts to boost spending, including passing a supplementary budget, easing regulations and even the two key interest rate cuts, consumer sentiment has still not recovered. However, a reading above 100 shows that there a majority of the people polled are confident in the economy.