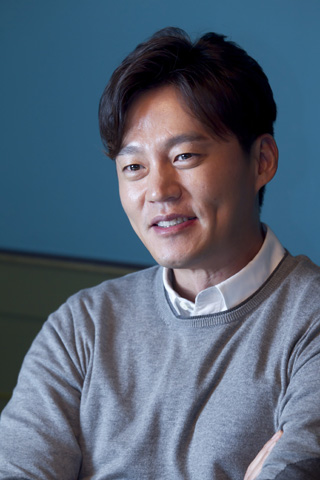 Actor Lee Seo-jin is scheduled to fly to London on Saturday to participate in an official event hosted by an international whiskey company. The 44-year-old has been invited as a guest, along with former British football player David Beckham.

Lee returned from Greece on Wednesday afternoon with the cast of the popular reality TV show “Grandpas Over Flowers.”

Since its first season in 2013, he has served as a tour guide for the program’s four senior stars, all in their 70s, helping them navigate foreign lands. He and Lee Soon-jae, Shin Goo, Park Geun-hyung and Baek Il-seob departed on Feb. 15 to film in Greece, where they went backpacking for 10 days.

Because shooting for the show had already wrapped, Lee could have flown to London from Greece, though officials from “Grandpas Over Flowers” said the actor wished to finish his role as tour guide for the senior actors, accompanying them until the end of their journey.

Lee will stay in Seoul for two days before flying to London.

The new season of “Grandpas Over Flowers” is slated to hit the air sometime in March or April.

Lee debuted as an actor in 1999 and has had lead roles in a string of drama series. He gained more media attention after he began appearing in reality shows, however, due to his candid and straightforward personality.