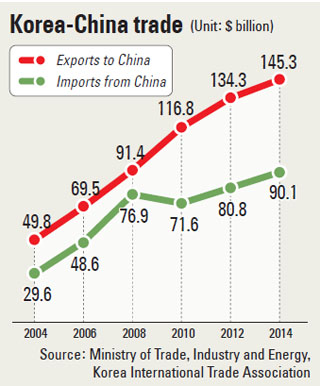 More than 300 products manufactured in the Kaesong Industrial Complex in North Korea will be given special tariff reductions for export to China once the Korea-China Free Trade Agreement (FTA) takes effect, the South Korean government said Wednesday.

This is the largest number of products from Kaesong that will be eligible for tariff reductions in a bilateral trade pact signed by Korea. Its FTAs with the United States and the European Union don’t deal with products manufactured by South Korean companies in the North Korean industrial park.

According to the Ministry of Trade, Industry and Energy, a newly upgraded pact was signed and exchanged on Wednesday in Beijing after follow-up negotiations were held recently. 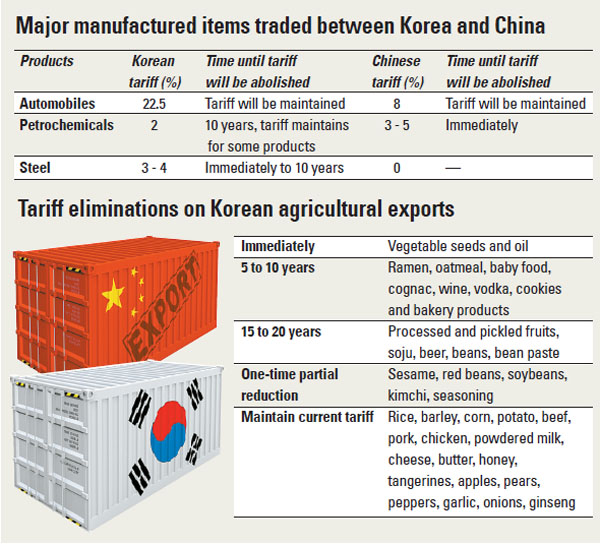 China is the largest importer of Korean goods in the world, and trade with the country has consistently risen over the past decade.

The FTA initialing on Wednesday in Beijing came after three months of continuous negotiations in which the two sides came up with more detailed articles and resolved technical and legal details.

On Wednesday morning, commercial attaches from the Korean embassy in Beijing exchanged the initialed documents with their counterparts.

With the initialing, the two countries confirmed the English version of the FTA document, and the “substantial agreement” announced in November has gotten a step closer to implementation.

The pact still requires official signing and final ratifications from the two countries’ legislatures before going into effect.

“The two governments agreed to do our best to complete an official signing by the first half of this year so that our exporters can start benefiting from the FTA as soon as possible,” Woo Tae-hee, assistant minister for trade and chief FTA negotiator, said at a press briefing at the Sejong government complex on Wednesday morning.

Signings of FTAs are usually done by trade ministers, but an official at the Trade Ministry said this FTA is likely to be signed by the two presidents.

Under the updated agreement, Korean producers of 310 products in Kaesong will benefit from reduced or completely eliminated tariff as if the products were produced locally.

This will improve the price competitiveness of those exports from Kaesong to China.

To be eligible, at least 60 percent of each product’s raw materials should come from China or Korea. The list of 310 products will be renegotiated every year.

The Kaesong provision is a lot more generous than in Korea’s other FTAs, the Trade Ministry says.

Korea and China also inserted language into the FTA to launch a group to discuss opening more industrial complexes in North Korea.

The updated Korea-China FTA also includes an article that potentially allows other countries or offshore industrial complexes like Kaesong to join the Korea-China FTA. The article was added on China’s request.

“Through the Korea-China FTA, I think China wants to set up a new trade order within Northeast Asia, which other major Asian economies like Hong Kong and Macau can also participate in and expand this bilateral free trade pact into a larger-scale trade partnership within Asia,” Woo explained.

The two countries also decided to form a separate committee that discusses new business zones in each country to encourage the exploitation of the Korea-China FTA. Discussion of jointly operated business zones received a boost in the wake of Chinese Vice Premier Wang Yang’s visit to Seoul at the end of January.

The locations of such business zones are undecided yet, but candidate regions include Yancheng, Yentai and Guangzhou, cities located on China’s southern and eastern coasts, and Saemangeum on the western coast of Korea.

As soon as the FTA goes into effect, Korean law firms with a China office can do joint projects with local law firms.

The rule will be first tested within Shanghai Free Trade Zone. Also, the Chinese government agreed to lower barriers for business licenses for Korean builders.

However, the Korea-China FTA still seems to be limited to manufacturers, and other areas remain protected by tariffs including farmers and manufacturers in weak sectors.

China excluded most of Korea’s key export items to China in auto parts, steel and petrochemical industries from the tariff elimination list.

The level of tariff reduction and schedule for elimination varies by the product.

But most of Korea’s top exports to China, such as displays, petrochemical products, mobile phones and auto parts, will maintain current tariff levels.

On the other hand, the tariffs on top imports to Korea from China - the list is similar, including semiconductor, mobile phones, computers and displays - will be mostly eliminated as soon as the FTA is implemented.

The details of Korea-China FTA are currently available to the public on the Trade Ministry’s website.