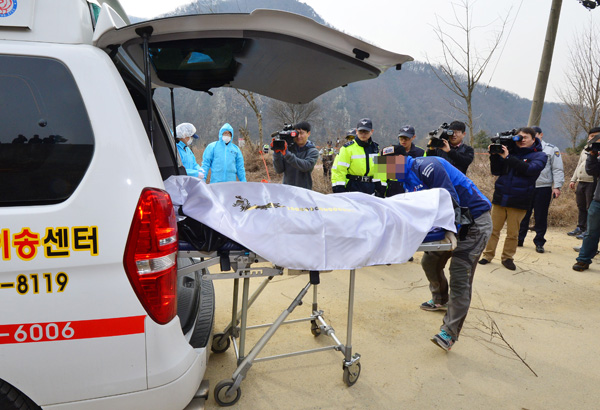 Police move the body of a man who is believed to have committed suicide after killing his ex-girlfriend’s brother, father and current boyfriend. The suspect, surnamed Kang, was a licensed gun owner. [NEWSIS]

A 50-year-old man killed three people on Wednesday morning in Sejong City and then set fire to a local convenience store, according to local authorities, who believe the crimes were motivated by a financial dispute.

The man, surnamed Kang, was later found dead and is thought to have turned his shotgun on himself.

His victims were later discovered to be his ex-girlfriend’s father, brother and current boyfriend. Kang’s ex-girlfriend, a woman surnamed Kim, 48, was in Pyeongtaek, Gyeonggi, at the time of the shooting spree, which police say was likely premeditated.

The suspect received two shotguns from a police station in Suwon, Gyeonggi, where he resided, and deposited them on Monday at the Singwan Police Station in Gongju, South Chungcheong, about 8 kilometers (5 miles) from the crime scene.

Licensed gun owners are required to deposit their firearms at nearby police stations, but they are allowed to retrieve their guns and deposit them at any police station nationwide during the hunting season, from November to February.

According to the Sejong City Police Precinct, Kang retrieved his shotguns at 6:25 a.m., after which he went to the victims’ residence in Sejong City.

He shot Kim’s brother, who was getting into his car to go to work, and subsequently broke into the house, killing Kim’s father in front of his family.

Kang later shot Kim’s boyfriend at a nearby convenience store owned by Kim’s father that she managed, which he set on fire before fleeing the scene. He was found dead with a gunshot wound to the head by the Geum River about 1 kilometer from the store.

According to an initial investigation, Kang previously lived with Kim and the two managed the convenience store together until they broke up about a year and a half ago. Kim’s father allegedly gave Kang about 30 million won ($27,000) when the pair separated, though Kang was reportedly dissatisfied with the amount, police said.

“Kim stated during questioning that she lived with Kang for about two and a half years,” said Lee Ja-ha, chief of the Sejong City Police Precinct. “She also said that he demanded more money after their break-up and often argued with her about their relationship.”

The incident Wednesday has since raised concerns about gun possession in Korea.

Kang obtained a firearms license in July and was able to freely deposit and take out his guns at a police station only 8 kilometers from where he killed the three victims.

As of last month, the number of gun owners in Korea stood at 163,663, which included 37,424 who own shotguns and 96,295 who own air guns, police said. Shotgun owners must deposit their weapons at nearby police stations except during hunting season.

“Licensed firearms users are allowed to store their guns at any police station, and there was no procedural problem in this case,” Lee said.

The bodies of Kang and the victims are scheduled to undergo autopsies.