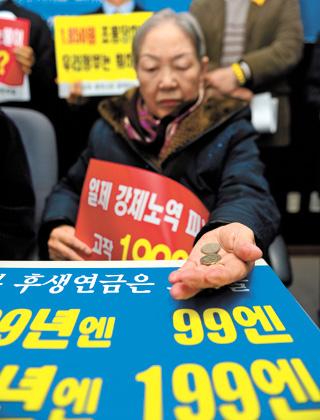 Kim Jae-rim, 84, shows two coins worth 199 yen ($1.7) during a press conference on Wednesday to condemn the Japanese government’s recent payment of the amount as a welfare pension refund for her forced labor during Japan’s colonial occupation of Korea. A group of activists and Kim held a protest in Gwangju and criticized the Japanese government’s “insulting” decision. They said the South Korean government should take diplomatic action to seek proper compensation for the victims of forced labor. Tokyo recently wired 199 yen each to three Korean women including Kim who were forced to work at Mitsubishi Heavy Industries in 1944.