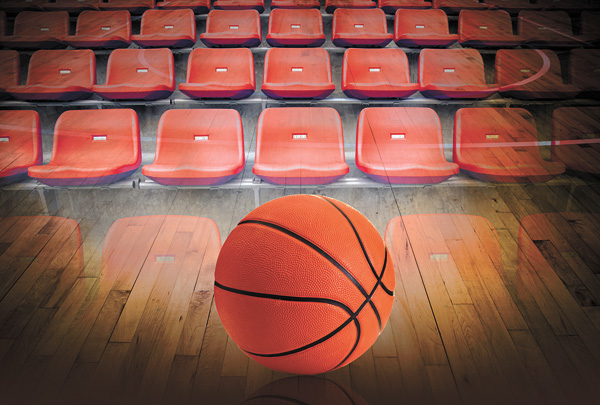 Basketball has become a top professional sport in winter around the world, but the Korean Basketball League (KBL) seems to be going backward. Although the end of regular season is just around the corner, the popularity of the sport isn’t like the old days.

However, as of Wednesday average attendance at KBL games was only 3,886, down 11.2 percent from last season.

The Samsung Thunders based in Seoul saw a bump in attendance early in the season after naming former superstar guard Lee Sang-min as head coach, but overall attendance is down 7 percent year-on-year. The Changwon LG Sakers, which were second in the league in attendance last season, are averaging 3,972 per game this year, a drop of 27.4 percent. 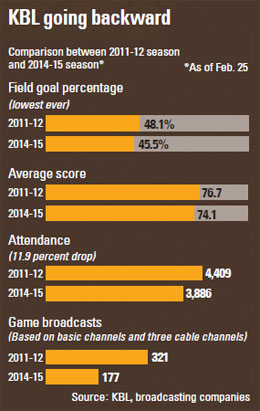 So far this season, television channels, including cable and IPTV, have broadcast 229 games compared to 257 during the same period last year, mostly due to cable station KBSN Sports dropping the KBL.

But analysts say the empty seats reflect the quality of play. In online basketball communities, fans mock KBL games as no better than high school basketball. For example, the average field goal percentage in the KBL this season is 45.5 percent, the lowest ever.

When KBL Commissioner Kim Young-ki took charge last July, he promised more scoring with teams averaging 85 points a game and even changed league rules to boost offense. However, KBL teams have been able to manage 74.1 points per game, up slightly from 73.4 points the previous year.

“Unlike in the past when players would practice all night on their own to get better, these days there are professional players who haven’t mastered the most basic skills,” says Park Gun-youn, an analyst at MBC. “As this trend accumulates over the years, the overall quality of the game suffers.”

What keeps fans on the edge of their seats is a tight matchup that is neck-and-neck to the end, but this season there have been 34 games won by 20 points or more. Last year there were seven.

And referees get their share of blame for the decline in fan interest, Calls have been so inconsistent and bizarre that on Feb, 2 the KBL adopted an instant replay system.

Nonetheless, in a game Sunday between the Changwon LG Sakers and Seoul SK Knights, Sakers center Davon Jefferson committed a clear violation by holding the net when blocking a shot. Although Knights Coach Moon Kyung-eun appealed to the referees, the play stood. On Tuesday, the KBL admitted it was a missed call and fined the referees.

“Referees’ attitude hasn’t changed much,” says an official from one KBL team who asked not to be identified. “Referees who haven’t learned the rule changes and overlook clear fouls are a headache we can do nothing about.”

Experts agree it is time for KBL to think hard about what can be done to turn around this situation. Although the new commissioner has proposed rule changes and proposed various plans - such as allowing two foreigners to play at the same time in the second and fourth quarters - experts say the KBL must step up as an organization to revive popularity of the sport.

“The basketball community should recognize this crisis,” says Kim Tae-hwan, an analyst at MBC Sports+. “Unless the KBL understands the poor quality of game and sees the administration problems, this crisis will continue.”

Others say the KBL should be more open to the voice coming from “the court,” not just the “table.”

“KBL decision making is usually done at a board meeting of general managers, but the opinions of coaches and players should be heard as well,” says Woo Ji-won, an analyst at SBS Sports. “It also is time to think about making the stage bigger, forming a Champions League like what football is doing, to motivate players and offer options to fans.”