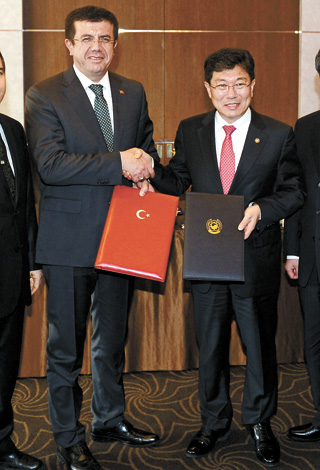 Korea and Turkey officially signed an expansion of its 2013 free trade agreement (FTA) Thursday to include services and investments, which will benefit Korean builders and entertainment companies.

Turkey agreed to open a total of 18 sectors including construction and cultural and environmental services, such as distributing and promoting Korean movies and concerts.

“At first, Turkey hesitated to sign the FTA with us because there are already lots of Korean builders and companies based in Turkey and Korea’s exports are much bigger than those of Turkey,” Kwon Hye-jin, a Trade Ministry official, told the Korea JoongAng Daily. “But they opened up their services and investment market for the first time to us, including the construction services sector we have focused on.

“The construction sector will help Korean builders already based in Turkey to legally secure ongoing or upcoming business in constructions there,” Kwon said.

Negotiations on the remaining two parts continued on and the countries signed a tentative English version on Sept. 18, 2014.

Increased bilateral trade with Turkey, Europe’s second-largest population, is expected to boost Korea’s gross domestic product by 0.01 percent point in total over the next decade, the Trade Ministry said.

According to the ministry, trade between the two countries from May 2013 to April 2014 surged by 33 percent compared to an earlier annual growth rate of about 19 percent.

The expanded trade pact will take effect once the legislatures of both countries ratify the new sections.