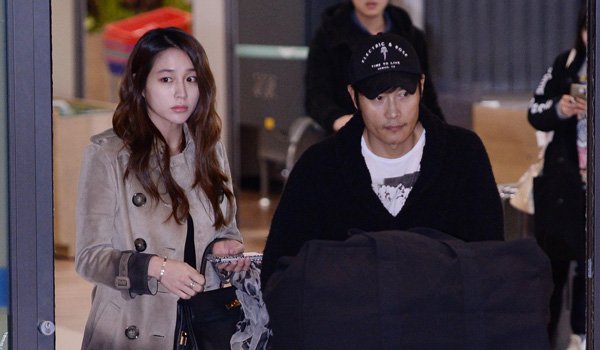 Actor Lee Byung-hun, who found himself at the center of a blackmail scandal last year, returned to Korea early on Thursday from Los Angeles with his wife, actress Lee Min-jeong.

“I’m sorry for causing such trouble as a public figure and the head of a family. I have deeply reflected over what I’ve done,” the 45-year-old told reporters at Incheon International Airport.

The remarks were his first regarding the controversy six months ago.

The actor sued fashion model Lee Ji-yeon, 25, and 20-year-old Kim Dae-hee, a member of the now-disbanded girl group GLAM, for blackmailing him with a video clip in August that showed him making lewd comments over drinks with Kim. The two asked for 5 billion won from him in return for not publicly releasing the clip.

On Jan. 15, the Seoul Central District Court sentenced Lee Ji-yeon to a year and two months in prison, while Kim Da-hee was ordered to serve one year.

But during the trial, the chief judge at the Seoul Central District Court also had stern words for the elder Lee, “[Lee Ji-yeon] probably believed that the actor had feelings for her because, despite being a married man, he kept in touch with her and sent her text messages, which implied that [he hoped for] a sexual relationship.”

The Korean Wave actor, who has previously taken roles in a number of Hollywood films, including “Terminator Genisys” and “G.I. Joe: Retaliation” (2013), added on Thursday morning, “I owe a lot to my family.”

Lee and his wife are prepared to stay in Korea for the time being. Lee Min-jeong is due to give birth in April.