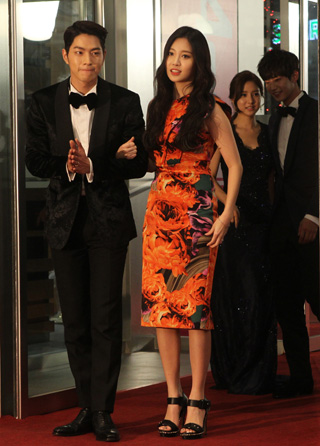 Two fictional couples on the popular reality TV show “We Got Married,” in which celebrities pair up to experience what life could be like if they were husband and wife, are slated to depart the program, an official from MBC confirmed on Thursday.

Actor Namgoong Min and singer Hong Jin-young, and actor Hong Jong-hyun and his fictional wife Yura of the girl group Girl’s Day, are all scheduled to leave the show.

“They will pull out of the show, but we’re not sure when the last airing for them will be,” the MBC source said.

Producers of the program are currently planning their replacements. “By adding two new couples, we will make modifications to the show’s current format,” the official added.

Both pairs recently wrapped their last shoot. Namgoog and Hong Jin-young both joined the show about a year ago, while Hong Jong-hyun and Yura, both pictured below, have appeared in the program for about nine months.

The variety show is often considered a rite of passage for new entertainers hoping to achieve fame, though many of them have dated other people in the real life while on the program.

Hong was recently romantically linked to Nana, a member of the girl group After School, though he denied those reports, saying he would stick with “We Got Married.”