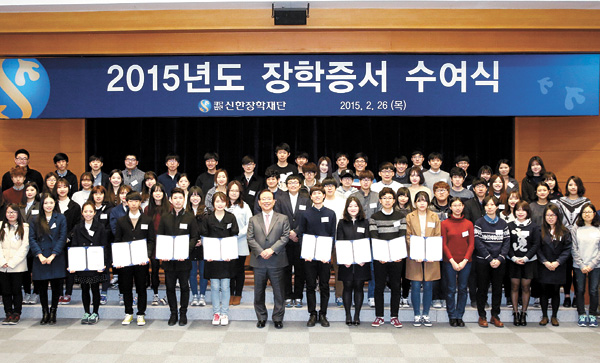 Shinhan Financial Group Chairman Han Dong-woo, center, with students who received scholarships from the group on Thursday. Provided by the company

Shinhan Financial Group said Thursday that it had picked 583 students from middle school, high school and college to receive scholarships from the financial group this year.

The scholarships were personally delivered by financial group Chairman Han Dong-woo at Shinhan Bank’s headquarters in downtown Seoul. The leading banking group has been giving out scholarships since 2006. Through the end of 2014, a total of 4,387 students had received a combined amount of more than 17.7 billion won from Shinhan.

Game maker Smilegate brings in its highest revenue ever

The Korean game company Smilegate announced Thursday that it recorded its highest revenue ever last year thanks to the success of its first-person shooter “Crossfire.”