Samsung’s washer with a sink is the hot new item

Samsung’s washer with a sink is the hot new item 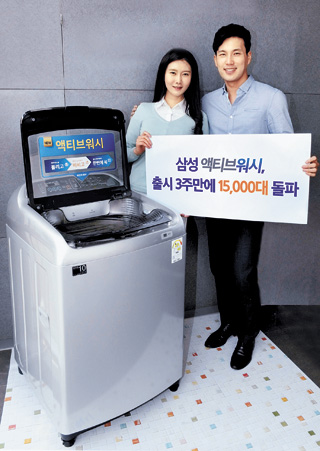 A new washing machine from Samsung Electronics that has a built-in sink has sold three times more than earlier new models in the first three weeks after its launch.

A miniature sink beneath the lid gives users the ability to pre-wash heavily soiled clothes or hand-wash delicate fabrics without resorting to a separate sink. Built-in water jets on the side start and stop with the push of a button.

Korea’s older generation still tends to crouch to do pre-laundering, of underwear in particular. The innovative feature on Samsung’s new washing machine will end the crouching and also the moving of dripping laundry from sink to washing machine.

“We are seeing an increasing number of customers visiting the stores after spotting Active Wash’s unique feature,” said a spokesman with Samsung. “Its sales are expected to grow as the wedding and moving house season in spring draws near.”

The model was first unveiled at the Consumer Electronics Show in Las Vegas in January. Yoon Boo-keun, Samsung Electronics CEO, said at the show that the product uses an ergonomic design, which has been a trend among electronics makers recently.