‘Empire’ is all about the lust, not history

‘Empire’ is all about the lust, not history 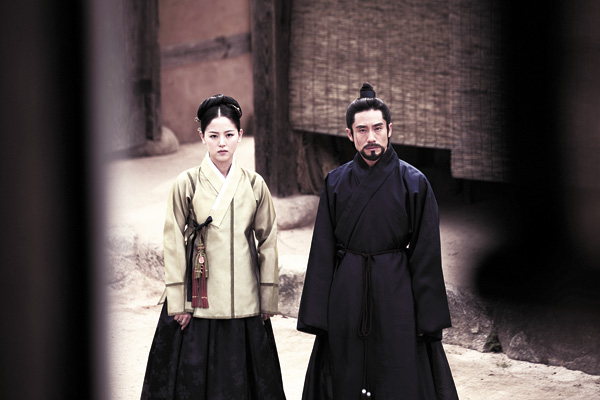 A plot that combines a fierce power struggle with a tangled love story in the early Joseon Dynasty (1392-1910) has led to high expectations for the upcoming movie “Empire of Lust,” directed by Ahn Sang-hoon.

The 113-minute film starts in the seventh year of the Joseon period when its founder, Yi Seong-gye (1335-1408), refused to abdicate the throne to Yi Bang-won, his fifth son who contributed immensely to establishing the dynasty. Instead, Yi Seong-gye chooses his youngest son, Bang-seok.

Actor Jang is successful in his role as the vengeful son who plans a revolt by training with his personal soldiers in the woods. His steady tone and deeply sorrowful facial expressions are well-delivered.

Then there are the problematic fictional characters: Gen. Kim Min-jae, his spoiled son Jin and Ga-hee, a gisaeng who becomes a lustful love interest for both of them.

General Kim, played by Shin (his first attempt at a period film), is on top of the political power circle after marrying the daughter of Jeong Do-jeon, who was very influential to the King.

But none of the work he has been rewarded for was his idea, as he is being taken advantage of by his wife and father-in-law.

One day at a banquet, the solemn, quiet general is lured in by Ga-hee, played by newbie actress Kang Han-na, who lures him to passionately love her like he never has before. What Kim didn’t know is that she only approached him in order to get revenge on his son Jin, who raped and tried to kill her years ago.

“For once, did you love me at all?” is one of the cliche lines that Kim says to Ga-hee when she is jailed for revealing everything she has done.

The director said he wanted to “disclose the unrecorded part of history amid the chaotic historical background,” during a press screening event on Tuesday at Wangsimni CGV in central Seoul. His intention was apparent in the film but in a disturbing way, with nothing much to see on the screen except too much skin and blood.

One cannot help but wonder why the director had to choose that particular turbulent era or the Joseon period at all. Usually, films set during that time are strengthened when supported by a balance of historical facts and unique interpretations of real people.

The angry yells and growling voices from the vassals during the royal assemblies were almost the only way that the audience could identify the film as historical.

When choosing between romance and history, the director definitely chose to focus on romance.

The film opens in local theaters on March 5.