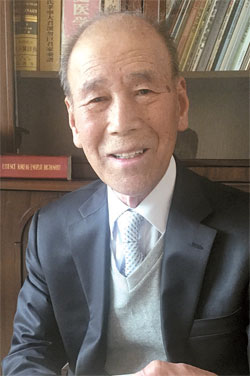 DAEGU - It’s almost guaranteed that participants at the World Water Forum, which commences in Daegu on March 12, will be greeted by 82-year-old Lee Yong-soo.

Out of the 432 volunteers selected for the 2015 forum, to be held at the Daegu Expo, Lee is the oldest and will be responsible for guiding about 35,000 foreign guests from 170 countries at the venue’s entrance.

Indeed, over his lifetime, the octogenarian has acquired a vast wealth of experience and knowledge.

Lee is trilingual and can speak English, Japanese and Korean fluently. In the 2003 Summer Universiade Daegu, he worked as a translator for Japanese guests. And at the 2011 World Championships in Athletics, he interpreted in English. He is also among an aging population born before the 1950-53 Korean War.

Born in Kyoto, Japan, Lee came to Korea to attend middle school. After graduating from Daegu Commercial High School, he served in the Army during the war. Afterward, he attended college and studied English literature.

Lee started out working as a translator for the Air Force and subsequently taught English for more than a decade at middle and high schools in the North Gyeongsang area.

From 1986 to 1997, Lee worked at LG Electronics Siltron in Gumi, North Gyeongsang.

His room in his house in Daegu doesn’t look like that of an 80-something-year-old man. Rather, it looks more like the room of a young scholar indulged in his research.

There are piles of outdated English dictionaries and documents in Japanese, English and Chinese characters. In his living room, there is also another trove of books and documents - with nothing to imply that the house belonged to a senior citizen.

“I want to show foreign visitors how intelligent an 82-year-old Korean man can be,” Lee said of the conference. “I’ll contribute to elevating the country’s status by introducing our history in English and Japanese.”