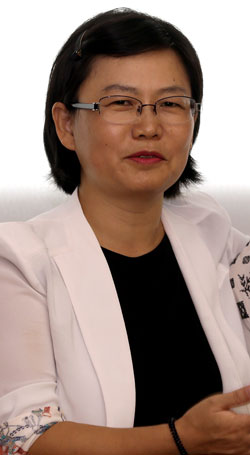 Lee Hye-kyeong, who defected in 2002, passed the pharmacist license exam on her fourth try. By Choi Seung-shik

Three times in a row, Lee Hye-kyeong, who fled from the North in 2002, failed the pharmacist license examination in South Korea. But on Feb. 17, she finally heard the good news: she passed the exam on her fourth try.

While Lee, 50, was in the North, she worked as a pharmacist for 12 years after graduating from Goryeo Pharmacy School in North Hamkyeong. When she decided to flee South, she was still passionate about her career.

But when she arrived, pharmacy licenses from North Korea were not recognized by the government - a regulation that was amended in 2007.

“I was surprised to see how ignorant people were about those from North Korea,” Lee said. “That ignited my will to apply to the pharmacy school at Samyook University in 2005 without worrying about my age or tuition.”

Lee - who has an elderly mother and two daughters - began to juggle her studies and supporting her family. “Those days in my 40s were very difficult,” Lee remembered.

To cover the expensive tuition, she did chores at the university like cleaning faculty offices. She delivered newspapers at dawn, and at night she walked around posting fliers as a part-time job. When the school break came, she earned money by cleaning motels.

But unlike the actual curriculum, which was similar to what she had learned in North Korea, what challenged Lee was the exam system itself.

When she first took the test, she didn’t know how to mark the answer sheet. She had to change her paper three times, wasting time and ultimately failing the exam. But she kept studying, while also establishing the volunteer organization Saesam (New Life) to provide mental health care and resettlement assistance to defectors. Sleeping no more than three hours per night, she finally passed the exam on her fourth try.

Lee is one of the few people who have earned a degree in pharmacy in both Koreas and gone on to become a pharmacist in the South.

Lee elaborated on the status of the pharmaceutical business when she was in the North back in the late 1990s, in which the country underwent the so-called Arduous March, the period of extreme economic crisis.

“As the economic status plummeted, medicinal supplies decreased by 10 percent in a single day,” Lee said. “The lack of antibiotics made any medicine a panacea, and ringer’s fluid [a rehydrating solution used in IVs] became so expensive that only the top executives had access to it.”

Understanding the pharmaceutical industries of the two countries, Lee plans to devout herself to helping other pharmacists from the North settle in the South, and hopes to serve as a bridge between the two Koreas.

“I would like to ask those in the pharmacy business to make the most of pharmacists from the North,” Lee said. “They will become the best resources when the two Koreas unify someday in the future.”