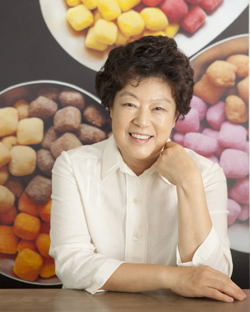 During a recent visit to the Blue House, Hangwa Grand Master Shim Young-suk suggested to President Park Geun-hye that the traditional Korean sweet be introduced in duty free shops in airports. Provided by Gyodong Traditional Food

Over the past 20 years, Shim Young-suk has experimented with hangwa, a traditional Korean confection, with the idea that she wanted to distinguish it from other types of world-renowned desserts.

The sweet, commonly made with grain flour, honey and yeot - a traditional candy similar to taffy - dates back to the Three Kingdoms era (57 B.C. to A.D. 668).

For her efforts, Shim was recently recognized by the government as one of 64 Grand Masters of Traditional Korean Food, a title established in 1994 to promote and improve the quality of the country’s unique cuisine.

She was appointed as the Hangwa Grand Master in December, the 59th among them.

“I have just persevered and pursued my own way,” Shim said of her two-decade journey.

When it comes to making the traditional Korean sweet, Shim has always insisted on using agricultural products cultivated in Korea and staying true to the traditional recipe.

“Because tradition refers to indigenousness, I believe using ingredients produced only from Korea is key to making hangwa,” she said.

For Shim, however, respecting tradition was not necessarily synonymous with resisting new approaches.

She tried a variety of ways to break the stereotype that hangwa is an old-fashioned snack. “Hangwa is very unique because it is the only fermented snack in the world,” Shim said. “I focused on developing hangwa that young people would easily enjoy by combining classic and modern flavors.”

That’s how the Gosiball, a type of hangwa, was created. Starting with glutinous rice made in the traditional way, Shim then added freeze-dried fruits and grains. She named her creation, combining the words gosurae, a ritual intended to extend luck in propitiating the spirits and “ball,” referring to the snack’s rounded shape.

“I regularly receive orders from high-class customers from Britain,” Shim said. “I feel proud so proud to have created this dessert every time I hear from someone that the Gosiball is more delicious than the macaroon, the French sweet.”

The Gosiball has since been patented and become the representative brand for Gyodong Traditional Food, an organization Shim heads.

But besides experimenting with the confection, Shim has also put in time over the years to design the sweet’s packaging and hone its presentation when served.

“I wanted those who see hangwa to think that they couldn’t possibly receive a better present,” Shim said.

As a result of her profound care, Gyodong Traditional Food has also since received a patent for its packaging design.

Her motivation to turn hangwa into a business came as she pondered what kind of gift she should present to the foreign buyers who worked with her husband, an international trader, eventually deciding on the hand-made sweets.

The idea was expanded into a business in 1999, when the Gyodong Traditional Food factory opened its doors in Gangneung, Gangwon.

Amid its success, Shim is now working on internationalizing hangwa and nurturing its presence worldwide.

“I wish hangwa stood out everywhere in the world,” she said. “Don’t you think it would be a proud moment to see hangwa sold at the airport - a gate to every country?”