Mother gets to meet man who saved her son’s life

Mother gets to meet man who saved her son’s life 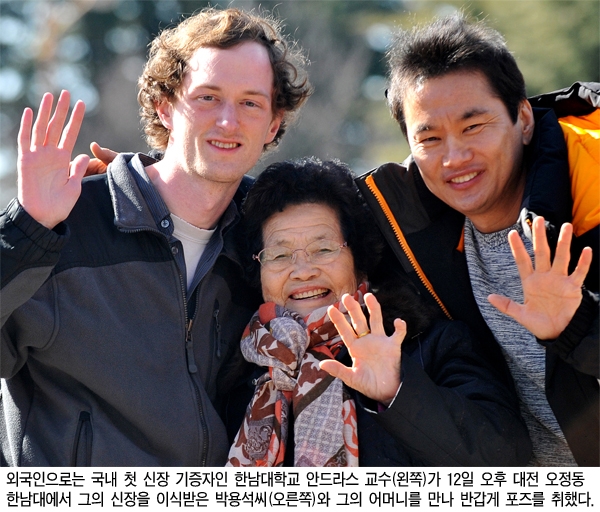 Gabriel Andrus, left, met on Feb. 12, with Park Yong-seok, right, who received a kidney from him, and Park’s mother Ban Jae-sun. By Kim Seong-tae

Just days before the holidays, Ban Jae-sun got her wish to meet with the man who saved her 43-year-old son’s life.

Without Gabriel Andrus, she would likely have lost Park Yong-seok, her youngest, who for the past eight years had struggled through kidney dialysis and had finally received a transplant last June.

The operation made Andrus, an American, the first foreign organ donor in Korea.

But although Park had met with him four times since the surgery, Ban never got express how thankful she was for his invaluable gift.

She got her wish, however, on Feb. 12, when she made the trip from Eumseong in North Chungcheong to Daejeon to see Andrus. Park also joined them.

“You don’t know how badly I have longed to meet Mr. Andrus to say thank you. It’s just such a pity that I can’t communicate with him well because of the language barrier,” she said. “I consider that I have another son now, because they share blood from the surgery.”

Andrus is a professor in the Department of Christian Studies at Hannam University and came to Korea three years ago.

Since his college years, he had considered donating his organs, Ban told the JoongAng Ilbo last June, a cause he regarded as noble and meaningful to others.

“As a rule, the donor’s name remains confidential, but Andrus’s story spread in the media,” said Lim Hye-jin, an assistant administrator with the Korean Organ Donor Program, the organization that promotes the culture of organ donation in Korea.

Andrus found the Korean Organ Donor Program in September 2013 and signed up as a kidney donor.

“I told my parents, who are living in Oregon in the U.S., that I had donated my kidney after I went through the surgery,” Andrus said smiling as Ban grabbed his hands. “They both understood after [I explained my reasons].”