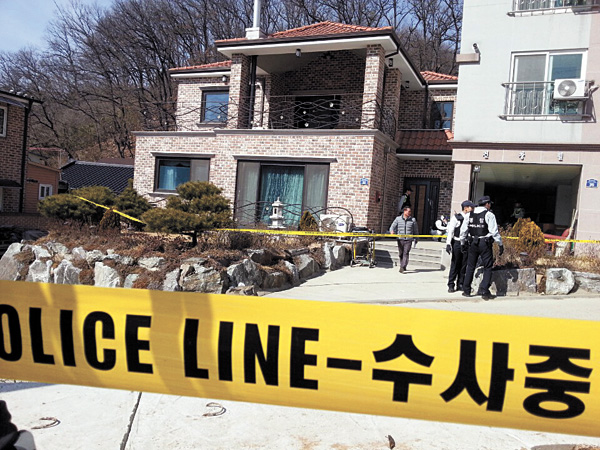 Policemen conduct a field investigation at the scene of a shooting rampage on Friday in Namyang-dong, Hwaseong, Gyeonggi. [NEWSIS]

A 75-year-old man went on a shooting spree Friday morning in his brother’s house in Hwaseong, Gyeonggi, killing the 86-year-old brother, his wife and a police officer sent to arrest him, before turning the shotgun on himself. It was the second fatal rampage in two days.

The police reported that the shooting spree was premeditated as the elderly killer, who was surnamed Jeon, left behind notes in which he vowed revenge against his brother for a financial dispute.

The suspect had retrieved his hunting gun from the Namyang police substation an hour or two earlier.

The police received a call at 9:34 a.m. from a neighbor who was sheltering a daughter-in-law of the slain couple who had fled the house in Hwaseong. She escaped by jumping from the second floor, sustaining an injury on her back.

“I heard the sounds of two gunshots and called the police right after the woman asked me to,” the neighbor, surnamed Cho, was quoted as saying by Yonhap. Cho said that he saw the alleged killer and his sister-in-law having a verbal brawl in front of the house before they entered it, after which the gunshots were heard.

Police officer Lee Kang-seok, head of the Hwaseong police substation, and a junior officer surnamed Cho arrived at the crime scene at 9:38 a.m., four minutes after the call was made.

The police reported that the killer warned them not to enter the house. Lee was fatally shot as he tried to enter the house with a Taser gun and without a bulletproof vest. After killing the officer, the suspect allegedly shot himself.

From the initial investigation, police say the suspect was disgruntled about a financial dispute with his brother and had confronted him about it in recent days. Jeon left behind notes in his car vowing revenge.

In Korea, the vast majority of men have experience firing deadly weapons from their 22-month mandatory military service.

But firearm murders have been rare because of the country’s tight gun-control measures.

In Korea, licensed gun owners, who pass screenings by the police, are required to deposit their firearms at nearby police stations, but they are allowed to retrieve their guns during the hunting season from November to February.

The killer in Sejong retrieved his shotgun from the police early Wednesday morning, which was widely reported in the news about the killings, just two days before Jeon did.

As of last month, the number of gun owners in Korea stood at 163,663, which included 37,424 who own shotguns and 96,295 who own air guns, police said. Shotgun owners must keep their weapons at nearby police stations except during hunting season.

Alarmed by the two incidents this week, the police vowed to strengthen its screening criteria for granting gun licenses and require gun owners to renew their license every three years, from the current five.