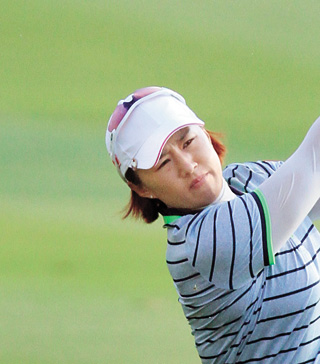 Amy Yang claimed her first victory of the season by winning the Honda LPGA Thailand on Sunday as Korea’s dominance in the LPGA continues.

At the Siam Country Club’s Pattaya Old Course, Yang - whose Korean name is Hee-young - shot 3-under 69 in the final round to finish the fourth LPGA event of the season with a total score of 15-under 273. She was two stokes ahead of fellow Korean Lee Mi-rim, Tseng Yani of Taiwan and American Stacy Lewis.

Rookie Kim Sei-young, who won the Pure Silk Bahamas LPGA Classic last month, shared fourth with Spain’s Beatriz Recari with 12-under 276. No. 2 ranked golfer Park In-bee was tied for seventh with Sandra Gal of Germany and Suzann Pettersen of Norway.

This is Yang’s second LPGA victory since October 2013, when she claimed the KEB-Hana Bank Championship. The 25-year-old has been runner-up six times since her LPGA debut in 2008.

She had a chance to squash that record last week in the Women’s Australian Open, but fell two strokes behind to finish second behind Korean-born New Zealander Lydia Ko.

Yang, who is ranked at 16th in the world, began the final round of the event with a stroke behind 11-time LPGA Tour winner Lewis, who had 13-under 203 through the third round.

But Yang cruised through the first nine holes by catching three birdies without a bogey, while Lewis, who was last year’s LPGA Player of the Year, went sluggish, only collecting two birdies while making a bogey.

Yang struggled a little in the last nine holes, making bogeys at the 14th hole and 16th holes, but as Lewis made a double bogey at the 15th, she was able to maintain the lead.

By the time she reached the last hole, Yang had a one stroke cushion against Lewis and sealed her victory calmly with a par event though her second shot fell into the bunker.

Including Lydia Ko, this season’s LPGA has so far entirely been claimed by golfers of Korean descent.