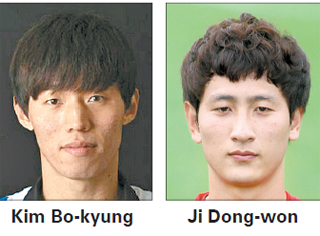 The fates of two Korean footballers who moved to new clubs during this winter stood at odds over the weekend, with midfielder Kim Bo-kyung scoring his first goal of the season and forward Ji Dong-won failing to impress.

Kim, 25, scored on Saturday his debut goal of the season, the first goal for Wigan Athletic in its 3-1 victory against Blackpool in the 34th round of the England Championship, the second division of the professional football league in England.

Even though it wasn’t beautiful, Kim managed to secure his first goal in 15 months in extra time on the first half that came out after a goalmouth scramble. He broke the 0-0 deadlock after Jermaine Pennant drew it back for him to get the ball to beyond Blackpool goalkeeper Joe Lewis.

The Latics later bagged a goal from Harry Maguire and James McClean to end its two-game losing streak.

According to data from Opta Sports, Kim had 54 ball touches, the most among Wigan players, and had a passing accuracy rate of 77.1 percent, second among players who were on the pitch.

Pundits say that Kim, who has three goals in 30 matches with the Korean national team, should have gained confidence with this recent debut goal and expect a boost in his performance after a previously dismal season.

Until his transfer to Wigan on Feb. 6, he only appeared in two league games and three FA Cup matches with Cardiff City, as he was not a regular starting member under Russell Slade.

Kim, who participated in the 2014 World Cup, was known as the next Park Ji-sung for his energetic movements on the pitch, but after playing opportunities decreased, he joined Wigan. He has now played six matches and has played full time over the past three matches.

In the 23rd round of the Bundesliga on Saturday, Ji played nearly 10 minutes as a late substitute on the 82nd minute in a match against Hertha BSC Berlin at the Olympiastadion in Berlin. The 23-year-old attacker didn’t make waves, however, as Augusburg lost 0-1.

It has been widely anticipated that Ji, who played with Kim in the 2012 Olympics in London to claim bronze, will rebound in the second half of the season, after moving from Borussia Dortmund to Augusburg in December. The former Sunderland AFC player didn’t feature in a single league match with Dortmund.

Ji, who previously played Augsburg in the second half of the 2012-13 and 2013-14 seasons, made his first appearance with Augsburg on Feb. 2 against Hoffenheim as a substitute, but since then the striker has featured as starter in the past four games. On Saturday, Ji was benched again, while Brazilian forward Caiuby played full time as starter.