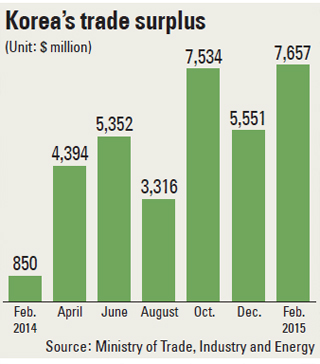 Despite the decline, the export-driven country recorded a record trade surplus of $7.7 billion, the 37th consecutive monthly surplus, as imports fell at a faster rate than exports at 19.6 percent.

The statistics released by the Ministry of Trade, Industry and Energy showed Korea’s February exports stood at $41.5 billion and imports were $33.8 billion.

Exports of petroleum products fell at the biggest rate, 44.1 percent, followed by petrochemical products, 24.2 percent, amid a sharp drop in global oil prices.

Exports of Korean cars fell by 16.3 percent year-on-year, mostly affected by a plunge in exports to Russia, the report said.

The biggest beneficiary from plummeting oil prices was the shipbuilding industry, whose exports rose by 127.2 percent year-on-year. Demand for high-value-added vessels such as drillships and offshore structures has surged, the report said.

The cut in crude oil prices and other raw materials reduced overall imports into Korea.

According to the report, imports of raw materials including crude oil shrank 29.7 percent year-on-year. Imports of some capital goods, such as automobile components, rose by 2.9 percent, and imports of consumer goods, such as watches, were up by 14.6 percent.

Fewer working days because of the Lunar New Year holiday reduced overall exports, the report said. Last year, the holiday was in January.

Exports to China, which accounted for 25.4 percent of total exports in 2014, dropped by 7.7 percent in February.

Exports to the EU countries also fell, by 30.7 percent, and those to Japan were also down by 23.4 percent.

The United States was the only major market for Korea that recorded a year-on-year increase in exports, with 7.4 percent.