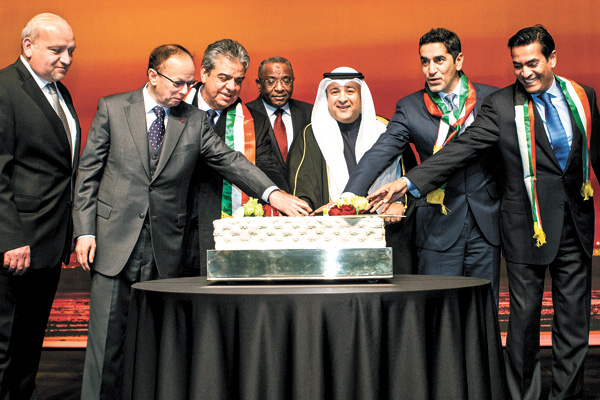 Ambassadors gather for a celebration of Kuwait’s 54th National Day and 22nd Liberation Day on Thursday at the Hotel Shilla in Jung District, central Seoul. Third from right is Kuwaiti Ambassador Jasem Albudaiwi. By Park Sang-moo

The Embassy of the State of Kuwait celebrated the country’s 54th National Day and 22nd Liberation Day with an event at Hotel Shilla in Jung District, central Seoul, last week.

National Day, which falls on Feb. 25, marks the country’s establishment as a sovereign nation in 1961 after gaining independence from the British Empire.

Commemorated the following day, Liberation Day recognizes the gaining of freedom from seven months of Iraqi occupation in 1991.

In a welcome address on Wednesday, Kuwaiti Ambassador Jasem Albudaiwi praised the “excellent relationship” between his native country and Korea, saying that diplomatic ties, which date back to 1972, are based on mutual trust.

Referring to President Park Geun-hye’s nine-day trip to the Middle East, which started Sunday, the ambassador said he hopes the overseas tour will improve the strategic partnership.

Park will make stops in Kuwait, Saudi Arabia, the United Arab Emirates and Qatar in the hopes of boosting Korea’s economy by signing various business deals in the region.

The Amir of Kuwait, Sheikh Sabah Al-Ahmad Al-Jaber Al-Sabah, was recognized by UN Secretary General Ban Ki-moon last September for his initiative in coordinating philanthropic activities in the Middle East.

The UN said in a press release that the country has “donated hundreds of millions of dollars for humanitarian operations” around the world, which “saved tens of thousands of lives, and has galvanized others to participate in coordinated international action.”

During his welcoming speech at the event, Chung said he hopes Kuwait continues playing a “pivotal role” in bringing peace to the world. Moon mentioned that the two countries will soon sign a memorandum of understanding to share medical treatment techniques.