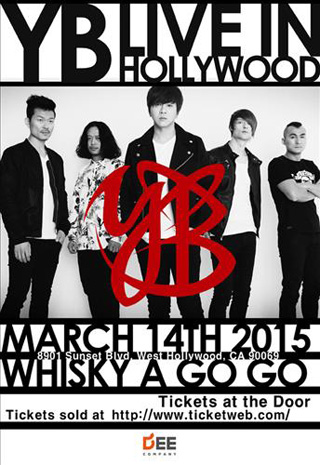 Rock band YB Band will have a solo concert at Whisky A Go Go, a California rock club with 50-year history, on March 14.

Dee Company, the agency of the band, said Sunday that YB Band was invited by the rock club and will perform there. It will be the first Korean rock band to play there.

Legendary groups such as The Doors, Led Zeppelin and Aerosmith have performed at the rock club.

During the concert at Whisky A Go Go, YB Band will perform a couple of songs that will be included on an upcoming album that is slated to be released in Korea in the latter half of this year.

YB Band will also participate in the South by Southwest music festival that will be held in Texas later this month.

YB Band began participating in the music festival in 2007 and it is now a regular at the festival. It was the first Korean act to perform there.

YB Band released its first global digital single, “Cigarette Girl,” in February 2014 in the United States and Britain, and said it will accelerate promoting its music in those countries.

The band has many hits but “Oh! Korea” is the most famous after it was used as an official cheering song for the 2002 Korea-Japan World Cup games.