Before: The people above wait for buses to arrive around Seoul. After: White tape placed on the streets in Gwanghwamun, central Seoul, signals where lines should start and end, allowing pedestrians to walk unimpeded. [JoongAng Ilbo]


It’s a familiar sight in central Seoul. In the evening, as working hours conclude, workers swarm highly trafficked areas - in front of the Sejong Center for the Performing Arts, for instance - and wait in multiple lines to board one of several buses that pass through.

But although lining up in an orderly fashion makes the process all the easier, it can be a headache for pedestrians.

So to rectify this seemingly age-old problem, Kwangwoon University’s Public Communication Lab did a little experiment, applying white tape shaped into brackets and arrows, so that people waiting in line can leave some space for those walking by while also keeping their place. With each commuter allotted a place in line, those waiting started voluntarily leaving space for pedestrians to pass.

“It’s surprising that a new public order - made just with strips of white tape and that represents such a small idea - has had such an effect,” said Jang Jong-won, a senior at Kwangwoon University.

Intrigued by the way in which such a small change made a lasting impression, the JoongAng Sunday, an affiliate of the Korea JoongAng Daily, started a campaign this year to seek out recent public orders that have had significant results. The project, known as LOUD, a shortened name for the slogan, “Look Over Our Community, Upgrade Daily Life,” will introduce the ideas and experiments carried out by researchers at Kwangwoon University. The effort is led by Prof. Lee Jong-hyuk, who works in the School of Communications.

“Citizens cannot just stand by while bureaucrats attempt, or don’t attempt, to make change,” he said. “Citizens should try to take the lead to make even the slightest change.”

Below are some of the experiments the newspaper has introduced so far.

Korea has long focused on keeping young walkers safe by advising drivers to slow down in areas near schools or facilities for children. 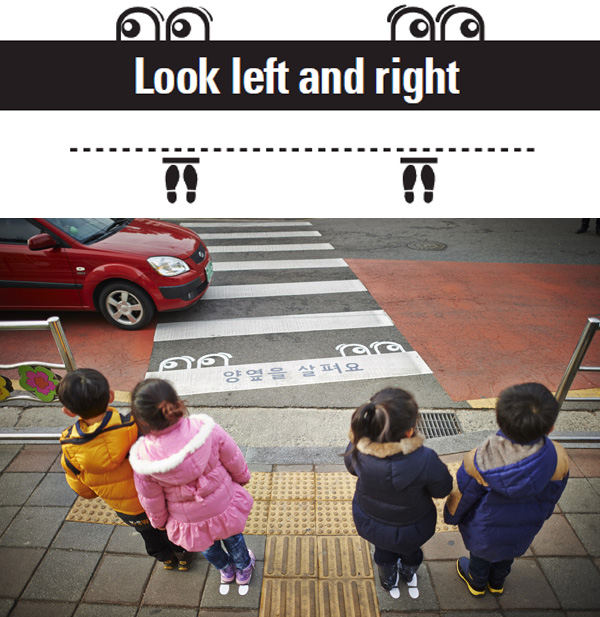 A painted sign on the crosswalk reads, “Look left and right.” The warning is intended to prevent elementary school students from running into the road.

The university team, however, placed its focus on child education in the hopes that making them aware of road safety would reduce accidents involving little ones.

So the Kwangwoon University researchers painted eyes and cautionary advice on the crosswalks near Sinheung Elementary School in Geumcheon District, southwestern Seoul, advising children to look left and right for oncoming traffic before stepping out into the street.

It’s still too soon to determine whether the change will lead to a decrease in the average fatality rate, but the reaction from parents and children that day was positive. “Since there is a picture and letters that encourage us to look around, it really helps remind us not walk across in such a hurry,” said 13-year-old Sin Ga-eul, a student.

Kim Jin-suk, a teacher at the school, said young children often feel more relaxed on narrower roads than larger streets because they mistakenly believe they aren’t as dangerous.

The team also created stickers that can easily be placed on the doors and windows of the buses that transport students to private academies. Because there are no designated stop signs for these buses, many young children run the risk of getting hit by an oncoming car, particularly if they fail to check first.

The sticker simply says, “Look,” and has arrows prompting them to look left and right.


Talking can make all the difference

Arguments and disputes between residents in crowded apartment complexes are not uncommon. In fact, noise complaints, and a general host of inconveniences, are expected in spaces shared by strangers. 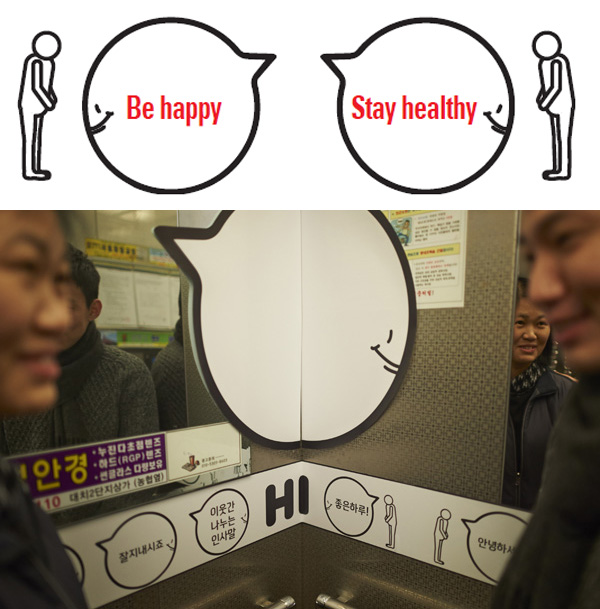 Speech bubbles installed in the SH Ville apartment complex in Gaepo-dong, southern Seoul, prompt residents in the elevator to greet one another

Most issues that could be resolved in an amicable manner, however, sometimes get blown way out of proportion - even resulting in violence - simply because the parties in question are unacquainted with each other. To restore that sense of community at apartment complexes, the most common type of residence in Korea, the team at Kwangwoon University added speech bubbles within the elevator to prompt neighbors to greet one another.

The first attempt was tested at the SH Ville apartment complex in Gaepo-dong, southern Seoul, where a few residents had recently gotten into a tiff about the persimmons dangling from the tree branches. Some tenants tried to collect them, while others attempted to stop them, arguing that the fruit should be kept on the tree.

The case served as the perfect example for how a lack in communication could become magnified. So the team decided to add simple greetings in the elevator, where the residents where most likely to run into one another.

Soon after the stickers were placed, tenants at least attempted to say hello, even though it was a bit awkward at first.

“If these are here, shouldn’t I say hello to you right away?” one middle-aged resident asked before walking away.

“Have a good day,” he called back behind him.

Many foreigners - even Koreans who have lived abroad for some time - have likely observed that few people in Korea hold the door open for others.

Seo Dae-won, the former deputy ambassador to the United Nations, even acknowledged in his book on etiquette that most Koreans must correct the habit of letting go of the door too quickly. 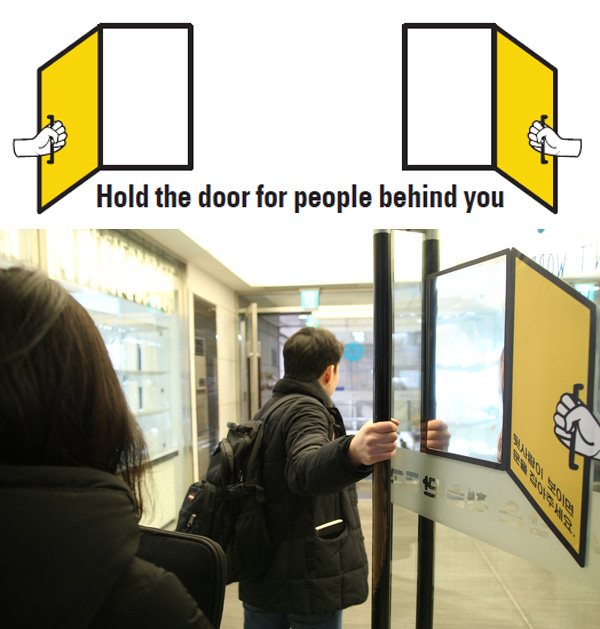 Visitors to Kyobo Bookstore in Gwanghwamun, central Seoul, are advised to hold the door for the person following behind. The sign was set up last month.

For this dilemma, the team at Kwangwoon University tried placing a paper mirror on public entrances to enable the person coming in to see whether someone else was right behind.

The paper, which cost less than 5,000 won ($4.50) to attach, included the notification, “Please hold the door if you see someone behind you.”

To test the theory, paper mirrors went up last month on the doors of Kyobo Bookstore in Gwanghwamun, central Seoul, and the results were positive.

More people started holding the door for strangers behind them.

“I couldn’t just walk away because the sentence on the mirror is so noticeable,” customer Jang Sun-hwa said in an interview.

Park Gil-sung, a social science professor at Korea University, added that the issue appeared to stem from a lack of ethics education in Korea.

“While other countries teach students that there is satisfaction to be had from helping and considering others, Korea barely has any education related to that, besides teaching students the larger sense of public etiquette - mostly what not to do,” Park said.

It’s hard to give an official answer when asked if one should stand in one line or two on the escalator. In Korea, this is a particularly puzzling quandary.

While most civil groups these days encourage commuters to form two lines, the advice was a bit different nearly 20 years ago. Many civil groups encourage people to stay toward the right side so that those in a hurry can walk up the escalator on the left. Until 2007, leaving the left side empty was common etiquette. 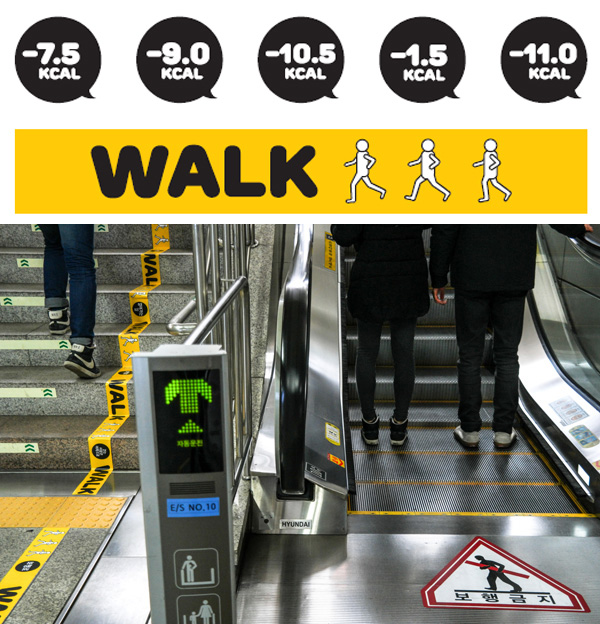 A “Don’t walk” sign applied in front of the escalators in Yeouido, western Seoul, urges people to remain stationary on the moving belt.

But the situation has changed since then, and research shows that people lining up on one side can cause more damage to the machine as more weight is concentrated in one area. So now, the logic has largely reversed, with subway operators and civil groups promoting the use of both sides. But habits are difficult to rid, and the change in protocol has led to confusion.

In this instance, the Kwangwoon University team used stickers once again. This time, stickers reading “No walking” were placed in front of the escalators to encourage users to remain stationary on the moving belt. Then, to make it even clearer, a yellow line that reads, “Walk,” was put near the subway station’s staircase. Speech bubbles also include the number of calories burned from using the staircase.

Little by little, the signs had an effect, and some people who saw the “No walking” sign headed toward the stairs instead.

“It felt wrong to walk up the escalators after seeing the sign,” said 25-year-old Jeong Seung-won, “So I followed the yellow line.”