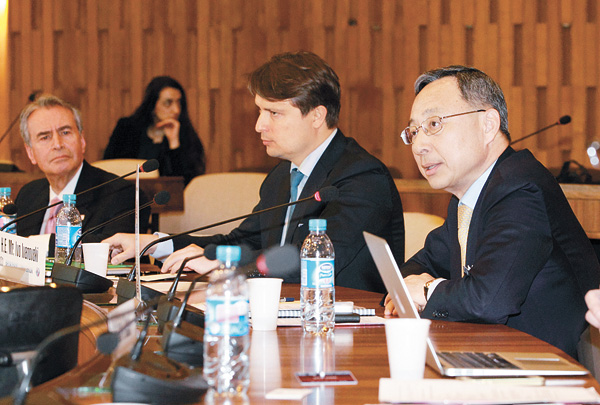 KT Chairman Hwang Chang-gyu, right, speaks at a meeting of the Broadband Commission for Digital Development on Friday in Paris. Provided by the company

He attended the meeting on Friday for the first time as a new member of the commission, where he cited what is known as the GiGA Island model as a means to expand broadband access worldwide to narrow the gap in information-sharing between developed and developing countries, one of the commission’s major goals.

The initiative was the first test subject in its GiGAtopia strategy geared toward providing the fastest Internet network.

The GiGA Internet is 10 times faster than existing services.

“The GiGA Island example will help expand broadband access to developing countries and realize a knowledge-driven society based on ICT solutions,” Hwang was quoted as saying at the meeting in a KT press release on Sunday.

The project was praised by government officials and analysts as a successful case of providing fast Internet services and wireless networks to an underserved community.

The launch of the KT’s high-end Internet infrastructure has changed the daily lives of residents on the island, and cutting-edge smart devices at a local school enables video conferences between teachers and students.

“Based on my experiences as the leader of a private company and a government body, I fully understand the significant impact of ICT solutions on the economic, social and cultural development of a country,” Hwang said.

“As a member of the Broadband Commission, I will dedicate myself to expanding the supply of ICT services.”

“Launching wireless infrastructure and expanding various mobile and smart solutions would be helpful for a country’s development and boosting its industrial competitiveness,” he said.

After wrapping up his stay in Paris, Hwang left on Saturday for Barcelona, where he will attend the four-day 2015 Mobile World Congress today, KT said, to promote the mobile carrier’s next-generation technology.

On Tuesday, at a session dubbed “The Road to 5G,” Hwang is scheduled to make a keynote speech regarding the importance of launching ultra-mega, super-speedy Internet networks and the innovation of Internet technology, as well as expansion of 5G technology in daily life.

On the sidelines of the congress, he is scheduled to meet with the CEOs of several ICT-related companies and discuss business ideas and projects, KT said.

He will also meet with members of the Groupe Speciale Mobile Association (GSMA), the world’s largest association of mobile operators and related companies, of which he has been a member since 2014.