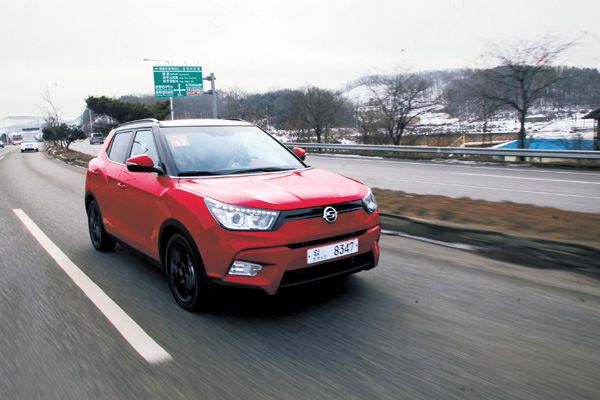 
Last year, the toughest competition in the Korean car industry was in small SUVs, and the trend is continuing this year. Many automakers competitively introduced new SUVs last year and a succession of models with stylish design and reasonable prices will try to convince consumers to sign on the dotted line this year. One of those SUVs is Ssangyong Motor’s Tivoli, which was introduced to the market in mid-January. It showed a commanding lead over rivals in sales with about 10,000 orders received. Earlier the month, the Korea JoongAng Daily took the wheel of the Tivoli, Ssangyong’s first new vehicle since 2010. The company invested 350 billion won ($318 million) to develop it.

The car used for the test drive was Tivoli’s highest trim LX, which runs for 23.47 million won and which includes a seven-inch AVN (audio-video-navigation) system.

The first ride was taken with Tivoli’s e-XGi 160, a power train that took three years to develop, on the Yongin-Seoul Expressway. When Tivoli came with a gasoline engine, industry insiders worried that it might not click with consumers since most popular SUVs have been diesels, which offer relatively higher fuel efficiency. But that may not be such an issue now with plummeting international oil prices.

One of the features that consumers don’t like about diesel vehicles is the noise since diesel engines are louder than gasoline engines. The Tivoli could capitalize on this. Not much noise was heard after the engine was turned on and the vehicle offered smooth acceleration up to 100 kilometers (62 miles) per hour. The Tivoli’s roar at full-speed was muted. It felt like the engine responded to the driver’s commands quickly.

When it exceeds 100 kilometers per hour, the 1.6-liter engine doesn’t feel like it’s speeding up, although the panel shows that the speed and RPM are increasing. Some people might not like the noise coming from the floor in the rear when the vehicle is running fast. But since the vehicle is designed for an urban lifestyle, acceleration and noise issues probably won’t be a major problem.

The fuel efficiency for the car is 12 kilometers per liter, which it achieved on the expressway. It was a rainy day with a little snow, but Tivoli’s front-wheel drive provided a sure grip on the road.

The next course was Gangnam District, southern Seoul, one of the most crowded regions in the city notorious for its terrible traffic jams. Since the test drive was in early February, when not so many Tivolis could be seen on street, about five to six people gathered when the driver parked the car at a coffee shop for a break. The reporter told them the car was on a test drive and let them have 15 minutes to take a look. 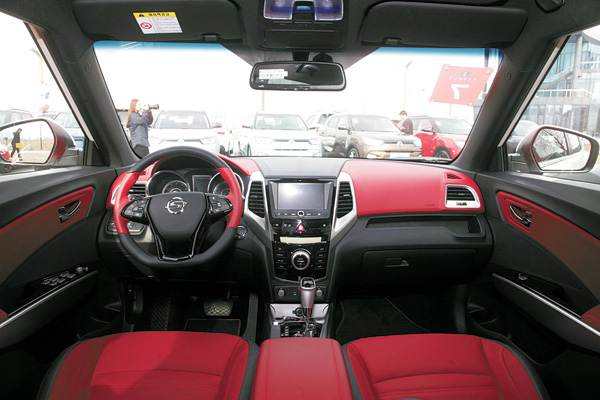 A seven-inch AVN (audio-video-navigation) system is provided in the Tivoli’s highest trim LX. Provided by the company

“I like its design and size,” said Oh Yoon-jin, a mother of a 3-year-old baby girl. “I was considering buying a small recreational vehicle such as Kia Motors’ Soul, but I was hesitating because I thought it might be too small for a mother like me who carries around so many baby things all the time. I think this is neither too big nor too small.”

It looks like women drivers who can feel uncomfortable driving big SUVs might be attracted to the Tivoli. It’s easy to smoothly pass through those narrow entrance gates at retail discount stores and department stores. The small size SUV with a rear parking assistance camera also allows easy parking in narrow and crowded places.

The Tivoli also has seven air bags, which are not offered in other vehicles in the same market segment. The fuel efficiency stayed between 8 to 8.5 kilometers per liter in the crowded Gangnam area, which is similar to rivals such as Trax by Chevrolet.

Tivoli’s price and roomy interior appealed to a consumer like Kim Jae-ha, 28, another person encountered on the street. “A man my age always wants to own a car,” he said, “But the problem is always money. But I don’t want to buy a tiny size car, so I think this is a good option for me considering the price range. I also think I can carry my sports gears including baseball equipment like bats and catcher masks.”

Ssangyong Motor said the car has 423 liters (15 cubic feet) of cargo space, enough to hold three golf bags, which is more than in other small SUVs.

Consumers might not be happy about its acceleration power and old-fashioned buttons on the entertainment and heating systems. But it feels like Tivoli has every necessary basic. The entertainment system can be operated via smartphones using Bluetooth mode.

Options that can’t be found on other small SUVs, including dual automatic air conditioning system and a D-cut heated steering wheel, are something to enjoy.