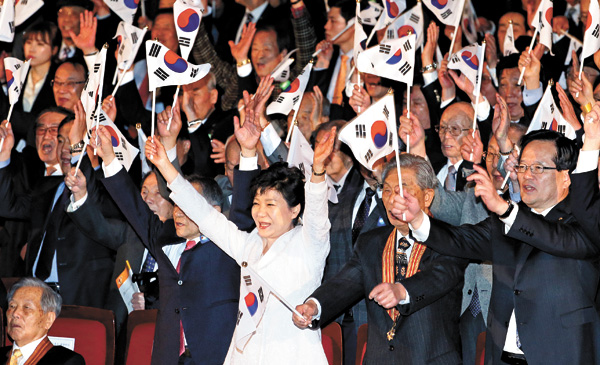 President Park Geun-hye, along with representatives from all walks of life, give three cheers at a ceremony to commemorate the 96th anniversary of the March 1 Independence Movement Day held at the Sejong Center for Performing Arts in central Seoul on Sunday. [Joint Press Corps]

“History is not something you can selectively choose from and remember to serve when it is needed and convenient,” Park said Sunday, quoting from an American historian. “Acknowledging history is the only path to progress.”

The president invoked the words of Alexis Dudden, a history professor at the University of Connecticut, who led a group of American academics who recently condemned the Shinzo Abe government’s efforts to downplay its World War II atrocities.

Park made the remarks at a ceremony to mark the 96th March 1 Independence Movement Day at the Sejong Center for the Performing Arts in Jongno District, central Seoul, on Sunday.

The demonstrations on March 1, 1919, in which activists proclaimed independence from Japan, are recalled with immense pride as the catalyst of Korea’s fight against Japan’s colonial rule (1910-1945).

On the issue of the Japanese military’s forced recruitment of women into sexual slavery during colonial times and World War II, Park said, “This is a human rights issue that we have constantly asked Japan to resolve.

“Like Germany and France, who were able to overcome animosity in the past to take the lead in building a new Europe, we hope that Japan can sincerely recognize historical truths and hold hands with Korea,” to build a new partnership for the next 50 years, she said.

Quoting from a U.S. academic and raising the example of European integration could be seen as Park’s attempt to emphasize that the issue of the so-called comfort women is not only bilateral but is recognized as a problem by the international community.

“The Japanese government’s continued attempts to deny history in its textbooks are yet another way to hurt relations with its neighbors,” she added.

This was Park’s third March 1 address as president, and each year the number of characters she dedicated to Japan has increased, from 456 in 2013 to 710 last year and 1,000 this year.

In 2013, two pages of her speech referred to Japan, which rose to four last year and five this year.

In 2013, Park stated, “The historic dynamic of one party being a perpetrator and the other party a victim will remain unchanged even after a thousand years have passed.” She was encouraging Japan to take a responsible attitude toward history.

In comparison, her message this year on settling history issues was much more succinct.

“There is concern that in Japan’s perspective, it may seem like Korea is setting a precondition that it will not move [on anything] unless a resolution to the comfort women issue or the textbooks issue is set forth,” said Lee Won-deok, a professor of international studies at Kookmin University.

She added that she looked forward to inter-Korean cooperation in sports, culture and the arts, as well as in railways and business projects.