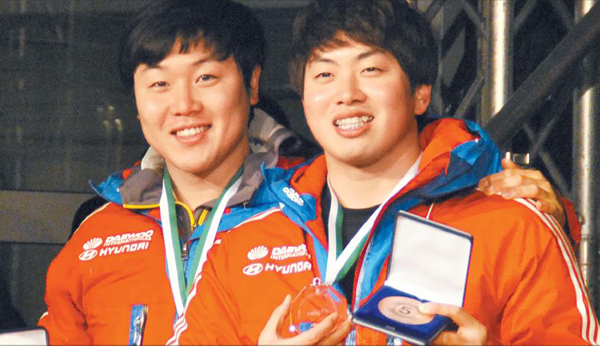 Won Yun-jong and Seo Young-woo became the first Koreans to win a medal in the International Bobsleigh and Tobogganing Federation (FIBT) World Championships, raising the expectations for their performance in the 2018 Winter Olympics in Pyeongchang, Gangwon.

In the two-man bobsleigh world championships in Winterberg, Germany, on Sunday, the Korean duo finished the event in fifth with an overall 3 minutes, 44.69 seconds after four races.

Medals are given for up to sixth place in FIBT events.

Previously in Korean bobsleigh history, the best finish in the world championship was 17th in the four-man bobsleigh event in 2012.

The impressive performance in the Worlds gives hope to Seo and Won, who serve as pilot and brakeman in the due, respectively. They finished 18th in the two-man bobsleigh in the 2014 Winter Olympics in Sochi, Russia, but within a year are inside the top 5.

The 29-year-old Won, who started to bobsleigh in 2010, first partnered with 23-year-old Seo in February 2011 in the two-man bobsleigh in Junior World Championships, where they finished 13th.

By shaping driving techniques and learning more about equipment management, pundits expect that the duo can achieve better results in the future. The Korean bobsleigh team has recently been inviting foreign coaches who are known for equipment and track analysis for help. Experts say proper management of the sled’s blades can reduce 0.3 seconds in racing time at a maximum.

“We are not satisfied yet,” the world’s No. 10-ranked Won was quoted by Yonhap News Agency. “We still think about things that we need to prepare and have to set up a plan for the future.”

Before the Worlds, the duo were signaling that they could get a good result in the European track as they finished top 10 in two FIBT World Cup events in France and Austria last month.

In the championships, which 33 teams competed in, Won and Seo clocked 56.63 seconds to take fourth in the first race. With a good start, the duo finished seventh in the next race with 56.46 seconds and settled for sixth in the third race with 55.66 seconds. But the team finished 10th in the final race at 55.94 seconds.

The world championship title went to Germany’s Francesco Friedrich and Torsten Margis as the European champions finished at 3 minutes, 43.3 seconds. Friedrich, who is the youngest two-man bobsleigh world champion of all time for winning the event in 2013 at the age of 22 years and 270 days, and brakeman Torsten Margis never missed the lead in all four runs to finish 1.06 seconds ahead of the silver medal winners, in which two teams tied.

World championship debutante Johannes Lochner and Joshua Bluhm of Germany, and Oskars Melbardis and Daumants Dreiskens of Latvia tied for second place in the two-man bobsleigh at 3 minutes, 44.36 seconds.