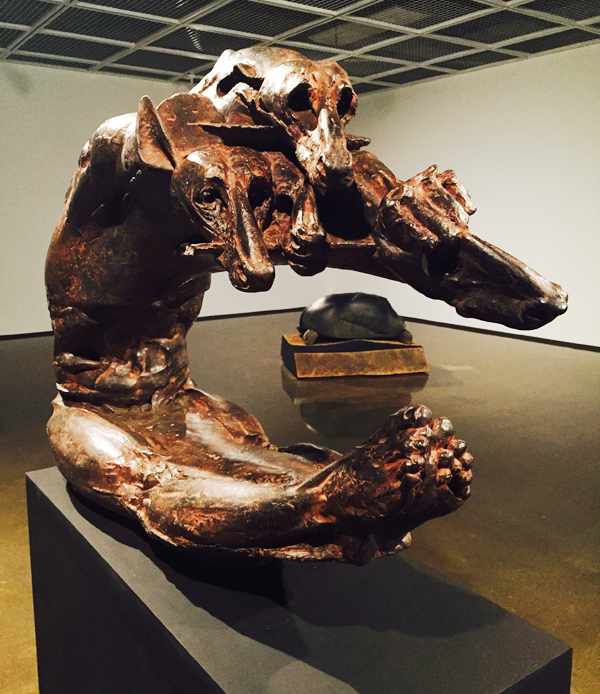 “Study of Anubis 2” (1992), a bronze piece by Novello Finotti, shows the Italian veteran sculptor’s interest in Egyptian myths and the archetypal themes of death and rebirth. It is part of his first solo show in Korea at Seoul Museum.

“Classic but not conventional” and “easy to understand but not shallow” are appropriate descriptions for Italian sculptor Novello Finotti’s solo exhibition, which started on Saturday at Seoul Museum in the center of Korea’s capital.

The 38 pieces on display by the Verona-born artist seem to be deeply rooted in a tradition of Italian sculpture formed by such masters as Michelangelo in the 16th century, Gian Lorenzo Bernini in the 17th century and Antonio Canova in the 18th century.

Finotti’s sculptures are figurative and are mainly based on the human body. They are primarily made from marble of various colors and bronze. The 76-year-old veteran artist exquisitely combines the elegant qualities of the human anatomical form and the color and texture of marble, as his Italian predecessors did.

Regarding this, Seoul Museum quoted Antonio Paolucci, the director of the Vatican Museums, as saying, “Such absolute materials [as luminous marble of Carrara, Portuguese pink marble and Belgian black marble] demand an exclusive cult. They require, expect and claim the homage of rigorous sapience and phenomenal craft. Finotti has accepted the ‘bet’ and has dedicated his life to studying and perfecting the ways and techniques which permit approaching those noble substances, understanding, listing to and penetrating them.”

At the same time, Finotti’s works have different characteristics compared to those of the Italian old masters. His sculptures spin stories with complicated, symbolic layers, based on the fusion of various mythologies, literature and modern history, whereas his predecessors’ pieces told clear allegories, based on Greek and Roman mythology or Christian tales. 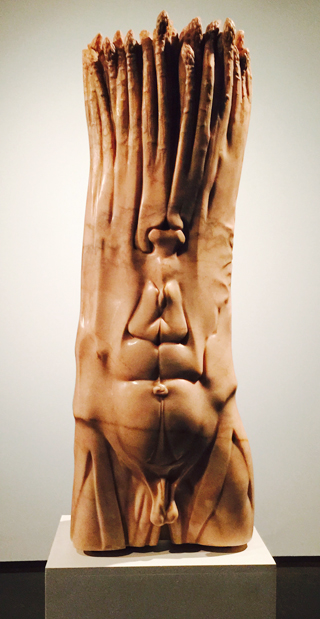 “Anatomical Plant” (1973-74), sculpted by Finotti out of Portuguese pink marble, is also part of the exhibition. By Moon So-young

Among such works is “Study of Anubis 2” (1992), a bronze piece. It seems to be a combination of Anubis, a jackal-headed god who led the dead to the afterlife in ancient Egyptian mythology, and Cerberus, the three-headed dog that guards the entrance of the underworld in Greek and Roman mythology. It shows the artist’s interest in archetypal thoughts about death and rebirth in mythology.

“As time passes, my thoughts about death and rebirth are becoming deep,” Finotti told reporters at Seoul Museum last week.

“After Chernobyl” (1986-7), a marble sculpture depicting a human body distorted and upside down, adds the story of a tragedy in modern history to the archetypal story of death.

Seokpajeong, a traditional Korean house and garden used as the summer house of King Gojong’s father, is now part of the museum.