A question of trust

A question of trust 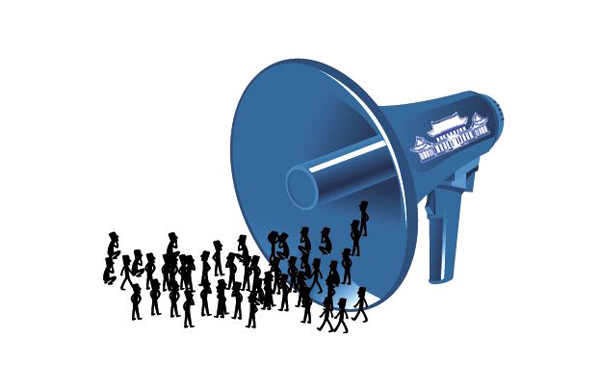 An interesting advertisement appeared on the front page of every newspaper in May 2008, during the Lee Myung-bak administration.
The Ministry of Agriculture, Fisheries and Food and the Ministry of Health, Welfare and Family jointly sponsored the ad.

“The beef imported from the United States and the beef the American people eat are the same,” its slogan read. The statement was written in white in a prominent font on a blue background. “The government will take full responsibility to protect the people’s heath,” it added.

Ridiculing the government’s ad, some netizens raised money online to come up with a parody.

“The beef imported from the United States and the beef the American people eat are different,” read the statement, which was written in white letters on an orange background. “The government must take full responsibility to protect the people’s health by renegotiation.”

The incident took place at the beginning of the controversy surrounding the 2008 resumption of U.S. beef imports, which paralyzed the Lee government for nearly 100 days and challenged the state’s integrity

Looking back, fears over mad cow disease were clearly inflated. The problem was that the public didn’t trust the government’s promise to protect people’s health.

Many also likely despised the ideologies and politics of President Lee and the United States, but Korean society as a whole refuted Lee’s idea that the people would be happy eating unlimited cheap beef.

While Lee’s remarks were intended to emphasize the economy and the effectiveness of the matter, concerns over mad cow disease — although inflated and inaccurate — reflected the overall public’s belief in leading a safe, healthy life.

Even grandmothers who lived as farmers their entire lives and never paid much mind to politics fought against the government in a recent controversy involving a plan to build a high-voltage electricity tower in Milyang, South Gyeongsang. No one liked the idea that highvoltage
electricity lines would be hanging over their heads. But if the government planned to build the same tower in a crowded apartment complex in Seoul’s Gangnam District, would residents remain calm?

The grandmothers, feeling uneasy about their health and safety, rushed to the construction site, abandoning their farms. The Korea lectric Power Corporation (Kepco) simply thought that the grandmothers had been influenced by “rebellious” environmental activists, or maybe that they wanted more compensation.

Instead of putting its faith in safety and health, the government tried to resolve the situation through physical force and economic ompensation, while area residents were forced to deal with the aftermath.

Protests against government projects have become commonplace because government countermeasures are still obsolete, despite modern changes. Although the government emphasizes economic effectiveness, the public is more concerned with health and safety.

The government can also no longer monopolize information and knowledge about its projects because of the spread of information.

To properly implement a policy, the government needs to express its sincerity by providing locals with accurate and correct data to win their support. Providing compensation or using police force to oppress the protesters becomes an act of hostility.

After a long debate, the government last week decided to restart the Wolseong 1 nuclear reactor. The reactor had finished its intended lifespan, though the government said it would make repairs and make upgrades to turn it back on, as if it were a used car. Anyone would feel dubious of this plan.

So, we must then ask the government what a designated lifespan means and what the government did before it reached its limit. The decision to restart a reactor that has completed its lifespan is one that should be made after a thorough scientific and technological evaluation, but it was decided through a vote, a disturbing development. I’m no expert, but the matter seems as if a group of scientists gathered and took a vote and decided that a theory of Einstein is right through a 7-2 vote.

In fact, the decision to extend the lifespan of the reactor is a matter of politics, before it is a matter of science and technology. Winning the agreement and trust of locals and the people is much more important.

Since the Fukushima Daiichi nuclear disaster in Japan, public insecurity toward nuclear safety reached new heights, and resolving esidents’ uneasiness should have been the first step before restarting the reactor.

But the commissioners who participated in the discussion couldn’t even reach a decision on the matter.

How can the government win the trust of the people?

It’s not the wisest decision to just go ahead with restarting a reactor just because it has already been decided. Although it may require more time and more money, having clear confidence in public safety is the most important task.