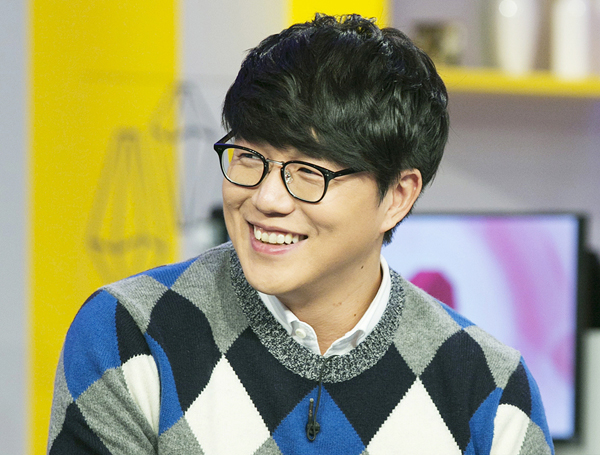 If there is one celebrity on TV who seems to know his way around women, it’s Sung Si-kyung. The 36-year-old singer has been appearing as a regular panelist on several talk shows that discuss relationship issues, such as cable channel JTBC’s “Witch Hunt” and “Dating Alone.”

Sung’s expertise in romantic matters partly derives from the sentimental ballads he sang in the early 2000s, including “Two People” and “It Would Be Good,” too.

He also hosted the MBC radio program “Music City” from 2011-14, where he counseled listeners who were going through love troubles.

In a recent interview with the JoongAng Ilbo, an affiliate of the Korea JoongAng Daily, Sung said he feels comfortable with the opposite sex because he grew up with older sisters. However, he also said he does no better than anyone else when it comes to dating because women’s personalities vary.

“There is no one who knows the mentality of a woman perfectly because they are all different,” he said.

Q. What are your most recent thoughts on dating?

A. My thoughts changed a lot after appearing on many talk shows related to love. Before, I used to cut off ties with all other women when I started seeing someone seriously, but I realized that people these days don’t think that way. In “Witch Hunt” I ask young guests if they think seeing several people at once is wrong, but they always question why it should be considered wrong.

What do you think about the term “some,” which refers to the feelings two people may experience for one another before they enter into an official relationship?

I still don’t get what “some” means exactly - whether it refers to only emotional communication or something beyond that. I guess it’s because I am now too old to sympathize with the sentiments of people in their 20s.

You give a lot of dating advice. How’s is your own dating coming along?

I don’t like artificial meetings such as blind dates. But I can’t wait for love at first sight. It’s becoming harder and harder to meet someone new.

Do you feel some kind of vicarious pleasure by appearing on JTBC’s “Dating Alone,” the new variety show where male panelists test their dating skills by going on virtual dates with female guests?

I became easily immersed in the show because the female guests acted so well, as if they were on a real date. But when I found myself too into it I felt ashamed. I blamed myself, asking, “What am I doing acting like this at this age?”

What are your most recent concerns about dating or marriage?

My job as a celebrity is one of my biggest concerns. If I were an ordinary office worker I would be able to lead a stable life after getting married. However, I doubt that the public will still love me as a married man. But at the same time, I can’t give up on meeting someone really special and maintaining a lasting love.