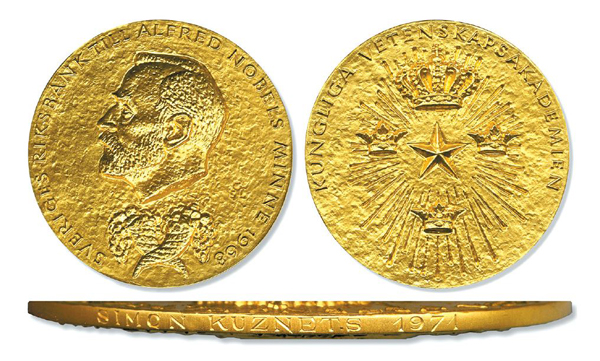 Economist Simon Kuznets’ Nobel Prize was auctioned to E-Land for 390,848 dollars. Provided by the company

A Nobel Prize medal awarded to Simon Kuznets, the economist who laid the groundwork for the calculation of gross domestic product, has been sold to Korea’s fashion and retail giant E-Land Group, the company announced on Sunday.

The group said it will display the medal to the public when it finishes its massive multi-city theme park project, which is still underway.

“We can’t say which theme park will house the gold medal, but it will be one of the museums in the theme parks,” said Hwang Woo-il, deputy head of the communications division at E-Land.

The 23-karat item is the first Nobel Prize in Economic Sciences gold medal ever to be sold at auction, though a handful of Nobel Prize medals in other subfields have been put on sale.

He said that the company plans to build large theme parks in several cities while not elaborating on the names of the locations.

The only part of the project announced so far is a theme park slated for Jeju Island.

The cultural and entertainment complex, due to be built by 2022, represents the group’s future strategy to transcend beyond selling retail products. The establishment will house museums, science parks, shopping malls and restaurants.

“E-Land will establish 10 to 15 museums in total,” a spokesperson for the company said in a statement.

“The medal is an invaluable artifact because it can inspire aspiring scholars and children.”

The medal is not the only item that will be showcased. E-Land said numerous pieces owned by Chairman Park Sung-soo will also be put on display as part of its project. Some of his items are already on display at restaurants and hotels run by E-Land.

Back in 2011, E-Land bought a 33.19-carat diamond ring once owned by late Hollywood star Elizabeth Taylor for 10.1 billion won.

This is just one of thousands of rare items belonging to the chairman, which also include a limited-edition electric guitar used by John Lennon, a fedora worn by Charlie Chaplin and the bamboo cane from the movie “The Golden Age” (1925).

More than 100 trophies from Academy Awards are also part of Park’s collection.

“E-Land has collected a number of rare items in order to gain plenty of content for the comprehensive business model that encompasses entertainment, leisure and dining,” the spokesperson said. “In the long run, we will establish museums that can compete with those of other countries so that the establishments can become national landmarks and a crucial asset for the company.”

The late economist’s award is the latest in a series of Nobel Prize to be auctioned off.

Prominent American geneticist James Watson sold his medal for $4.75 million at an auction in New York back in December, marking the first time for a living laureate to sell his or her prize.