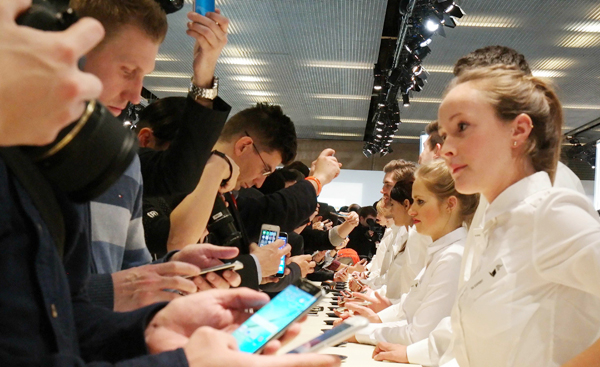 Visitors check out Samsung Electronics’ flagship smartphones Galaxy S6 and Galaxy S6 Edge, which made their global debut on Sunday local time at the Mobile World Congress in Barcelona. Provided by the company

The new models are the byproduct of the top smartphone maker’s latest efforts to extend an increasingly narrowing gap with Apple and its low-cost Chinese rivals, including Xiaomi, Lenovo and Huawei.

The newest models, follow-ups to last year’s S5, have ditched Galaxy’s traditional plastic construction and instead have a solid metal frame and glass back, similar to Apple’s iPhone.

The S6’s cousin, the S6 Edge, has also evolved one step further from the Galaxy Note Edge that was released late last year and places independently functioning curved glass displays on each edge of the body.

“With the new Galaxy S6 and Galaxy S6 Edge, Samsung is offering what’s next in mobility, along with a new standard to drive the global mobile agenda,” CEO JK Shin, who heads the IT & Mobile Communications Division at Samsung Electronics, said at a press event a day before the official opening of the Mobile World Congress in Barcelona.

“By listening to our customers, and learning from both our successes and missteps, we continuously push forward new technologies and ideas.

Both models, to be placed on shelves starting April 10 in 20 countries including Korea and the United States, are the product of an ambitious campaign known as Project Zero, which Samsung launched years ago to rebuild its signature product from the ground up.

“I expect a considerably better sales record for the S6 than for its predecessor, the S5,” said Greg Roh, the head of technology research at HMC Investment Securities.

“The design has been enhanced, thanks to the metal and glass covers, to meet the latest trend in high-end smartphones.”

The S6 and S6 Edge are “Samsung’s attempt to finally convince the world (or at least snooty phone reviewers like myself) that it has design chops akin to Apple or HTC,” wrote Joanna Stern of the Wall Street Journal, adding they are “the most beautiful phones Samsung has ever made.”

He also predicted shipments of the S6 and S6 Edge would be much greater than those of the S5 and eventually boost share prices as well as performance in Samsung Electronics’ sluggish IT and mobile communications division.