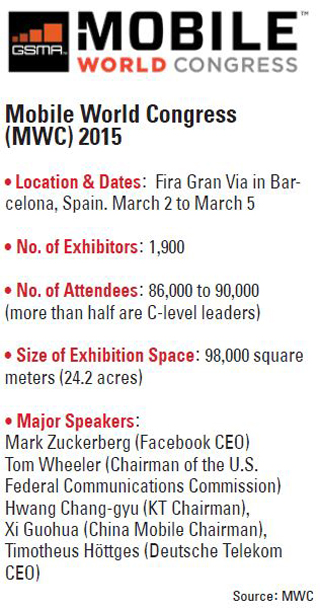 To scope out the latest products and technologies for the Internet of Things (IoT) and next generation wireless network 5G platforms, electronics makers and mobile carriers from around the world made pilgrimages to Barcelona, Spain, where the 2015 Mobile World Congress kicked off Monday under the theme The Edge of Innovation.

As many as 1,900 mobile businesses showed off IoT services and cutting-edge 5G technologies at the event.

One noticeable trend is an intensified race for wrist devices as smart watches and bands are considered promising platforms for IoT. Wearable devices were restricted to health apps last year. Now they are able to receive calls, control automobiles and home appliances, and even pay bills even without connecting with smartphones.

LG grabbed attention even before the event with LG Watch Urbane LTE, which is the world’s first smartwatch available for LTE.

LG is aiming to become a leader in the wearable device market, departing from its strategy of following rivals in the oversaturated smartphone market.

The company is showcasing the watch’s ability to start a car and unlock a car door.

The watch can also be used to make calls over LTE without pairing to a smartphone, send voice messages like a walkie-talkie or make payments via near field communication (NFC) technology.

Pebble, the pioneer of smartwatches, launching its new Pebble Time smartwatch, which has a seven-day battery life.

Apple will reveal specifics on the Apple Watch in an event it holds next Monday. Apple Watch, which made its first appearance in September during an event launching the new iPhone 6 and iPhone 6 Plus. The wearable’s commercial sale is slated for April. 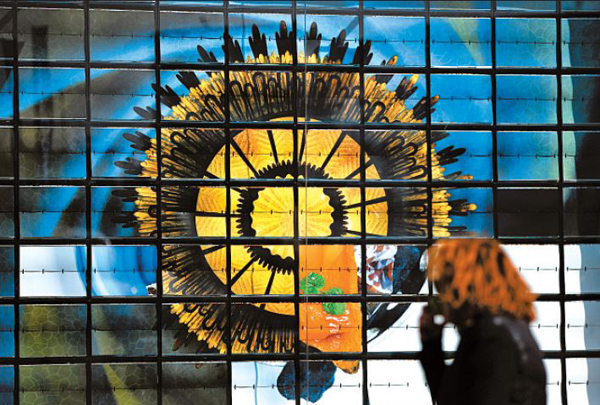 A visitor passes an electronic signboard displaying a graphic eye outside the Mobile World Congress 2015 exhibition halls at Fira Gran Via in Barcelona, Spain, on Saturday, Feb. 28. [BLOOMBERG]

Market researchers forecast that the smart watch market is going to grow to as many as 100 million devices being rolled out by 2020.

Chinese and Taiwanese companies such as Huawei, HTC and Asus displayed improved versions of their smartwatches. Huawei recently hired more than 300 IT professionals and established nine research and development centers for 5G technologies. Huawei unveiled its smartwatch on the first day of the MWC.

The company also revealed its ambition to lead the international standardization of 4.5G network.

“We will vitalize IoT applications through 4.5G,” said Bob Cai, Huawei vice president of marketing for wireless networks, at a pre-MWC briefing.

The competition was the most visible in Hall 3 of the convention center. Major IT companies such as Microsoft and IBM were located there, while Samsung held the central area. Right in front of Samsung’s booth was Huawei and ZTE, another Chinese company, faced Samsung diagonally. Lenovo and China Mobile are in the same exhibition hall, making Chinese ambitions in the industry clearly visible.

Haier, a Chinese electronics group, presented a smartwatch as well as a device for managing pets at home. Xiaomi, another Chinese IT producer, is expected to release a new model watch too.

“We have moved past the Chinese companies being followers to being leaders,” said Michael O’Hara, chief marketing officer of the congress in an interview with CNBC.