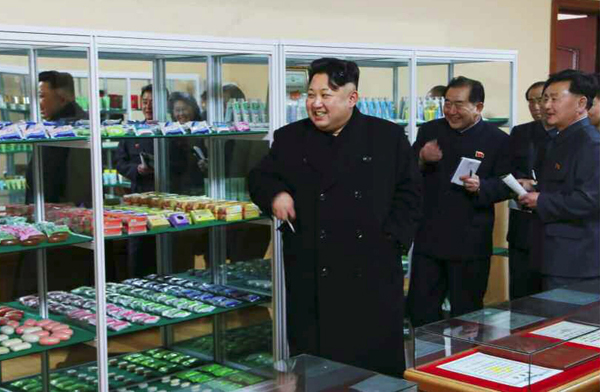 It appears that some of the most sought-after South Korean products in North Korea are cosmetics.

Sulwhasoo, a domestic brand that produces brighteners, powders and cleansers, is particularly popular among the Pyongyang elite, and allegedly loved by first lady Lee Sol-ju.

The Rodong Sinmun, the state-run newspaper of the North Korean Workers’ Party, reported on Feb. 5 that North Korean leader Kim Jong-un recently made a visit to the factory in the capital, where he admired its products.

“The demands for cosmetics increase day by day,” Kim was quoted as saying by the newspaper. “Our cosmetics factories should produce more products so female workers can improve their appearance.”

Kim remarked on the quality of the brand’s cosmetics.

“Enhance the quality of our cosmetic products,” he said. “Make our people want to use Unhasu, rather than brands from other countries. Let’s make it so that markets worldwide know about our Unhasu brand.”

Kim’s emphasis on boosting sales and reputation was likely an allusion to the fact that many South Korean and Chinese products are brought into the Communist state via Chinese trade channels. South Korean cosmetics are popular, in particular, among North Korea’s female university students, who - like their Southern counterparts - prefer more expensive, high-quality items to cheaply made domestic or Chinese merchandise.

But despite rampant poverty in North Korea, many young women manage to purchase pricey cosmetic items with the help of their parents, who hold some sway in North Korean society.

If not, five to six women typically collect money to buy South Korean cosmetics from an unauthorized market and then divide the lot into smaller bottles. This method was the same adopted by South Korean women to buy expensive foreign cosmetics in the post-war 1950s and ’60s.

South Korean cosmetics are especially favored by North Korean students, who are eager to brag and parade their costly items in front of their friends. In their eyes, beauty is much stronger than ideology.

Still, there are minders everywhere in the reclusive regime, and police and school authorities don’t treat the phenomenon lightly. But the crackdowns do little to curb demand for South Korean cosmetics.

The same holds true in South Korea, where students are constantly plugged into their smartphones as parents and teachers attempt to suppress their use.

But besides price and status, why are North Koreans so interested in South Korean cosmetics?

The reason is simple: Because North Korean women, like many women the world over, want to look and feel beautiful, and no political ideology can curb that desire.