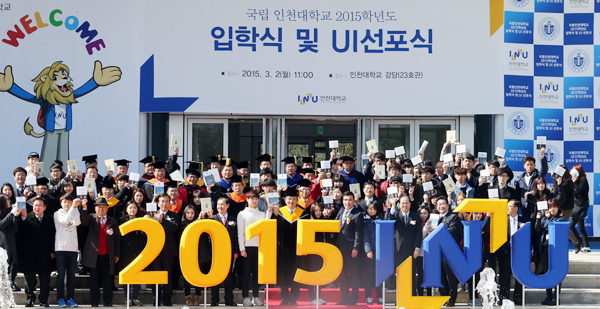 Freshmen and representatives of Incheon National University gather on the school’s campus in Songdo, Incheon, on Monday, the first day of the 2015 spring semester. Students hold books distributed by the school. Provided by the university

Around 3,000 people gathered at Incheon National University (INU) in Songdo, Incheon, on Monday to participate in a groundbreaking ceremony, where school delegates welcomed incoming freshmen and introduced symbols that will represent the country’s only university that has gone from being private to municipal to national.

In his welcoming speech to some 2,700 incoming students, the president of INU, Choi Sung-eul, spoke of the school’s “remarkable journey” since its foundation in 1979, stressing that the employment rate among its undergraduates has “exponentially soared” and its professors have “shown outstanding performance in various fields, including solar battery research.”

However, what he spent more time discussing in his 14-minute speech was his own message for the school’s newest students.

“Design your future here [at INU]. Dream big, don’t be afraid to take challenges and be confident,” he said. “INU will do whatever it takes to support your goals.”

Choi also vowed to boost INU to become one of the country’s top five national universities by 2020, on goals based on education, research, internationalization and social volunteering.

The ceremony also provided insight on the school’s new seal, logo and mascot, all of which school officials said will help elevate INU following its transition to becoming a national university in 2013. The seal represents liberty and the truth, while its logo, inspired by a compass, symbolizes that the institution will help guide students toward the future, INU said in a press release. Its mascot, a lion, stands for courage and strength.