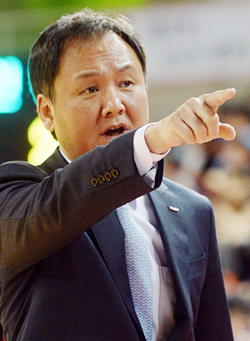 Ulsan Mobis Phoebus coach Yoo Jae-hak is nicknamed Mansoo, meaning a man of 10,000 tactics. Yoo, who turns 52 on March 20, has been tabbed as one of the best coaches in Korean Basketball League (KBL) history, and behind his success there is a simple philosophy: No player is better than the team.

Phoebus has clinched the KBL regular season title on Sunday after second place Wonju Dongbu Promy lost to the Seoul SK Knights. Title in hand, Phoebus went on to beat the Incheon ET Land Elephants, 74-66, on Monday for its 38th win of the season against 15 losses.

Phoebus will celebrate the regular season triumph in front of home fans on Thursday when it hosts the Busan KT Sonicboom.

The architect of the Phoebus dynasty is Yoo, who started his coaching career at age 35, the youngest in KBL history.

Prior to this season, Yoo, who previously managed Incheon ET Land and Daewoo Securities, was pessimistic about Phoebus. He had led the Korean national basketball team in the FIBA Basketball World Cup and won the gold medal at the Incheon Asian Games.

“There are no dominant or weak teams in this season,” Yoo said during the preseason. “Pheobus will aim for the six-team playoffs.”

As the season started, his “systematic basketball” emphasizing team play and patterns started to work.

Phoebus is one of the KBL clubs that prioritizes team harmony. All players eat breakfast at 8 a.m., and bench players and rookies do extra training mornings and evenings.

Some experts say Yoo is too meticulous as he micromanages every player to the point where creativity might be affected, but the former Korean national team point guard has the trophies to prove his system works.

“We can build around a team with certain player or fit that player into the team, but I prefer the latter.” Yoo said. “You need to conquer the players in this systematic basketball and find out who is pretending to work hard or not.”

In Yoo’s basketball star players are no exception and for this season forward Moon Tae-young learned it hard way. As the U.S.-born Korean frequently argued with referees, Yoo removed him from the starting lineup.

For the regular season title, Yoo said assistant coaches Kim Jae-hoon and Cho Dong-hyun handled the team nicely in the preseason even though he was absent because of his national team duties, while complimenting veteran point guard Yang Dong-geun and center Ricardo Ratliffe who successfully filled the void left by Benson.

“Yang should have been tired physically and mentally, but he overcame it very well, while Ratliffe also matured to provide a big lift for a team,” he said.

Yoo’s is now eyeing his fifth championship ring as Pheobus goes directly to the semifinals of the playoffs as the regular season champion. If he wins this year, he will be the first coach to win the KBL championship three times.

In addition, Yoo would set a new record for most playoff and championship series wins.

“It’s not going to be easy, but this is an opportunity,” he said.