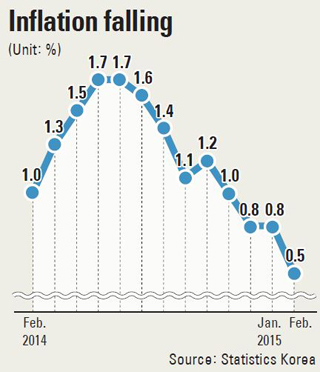 Korea’s consumer price inflation slowed to its worst pace in 16 years at 0.52 percent, despite the increase in cigarette prices and the Lunar New Year holidays, according to government statistics on Tuesday.

The country’s Consumer Price Index (CPI) stood at 0.5 percent from a year earlier and remained unchanged from January, according to a monthly report by Statistics Korea. The livelihood price index, which refers to the prices of 142 items frequently purchased in daily life, like food and monthly rental fees, dropped by 0.7 percent year-on-year, the report said.

Prices for seasonal items like fish, vegetables and fruit were also down 1.1 percent from a year earlier, despite the Lunar New Year holidays, when demand for those items typically rise.

According to Statistics Korea’s monthly reports released early this week, the country’s year-on-year imports fell 19.6 percent in February, while exports were also down 3.4 percent. Consumption also contracted by 3.1 percent, and production sank 1.7 percent.

Officials from the Korean Ministry of Strategy and Finance say falling figures in recent data were mainly due to global oil prices and calendar effects. According to the statistics, year-on-year prices for petroleum products dropped 24.3 percent in February.

Nonetheless, the Bank of Korea has maintained its 2 percent benchmark interest rate, amid international pressure on monetary easing.

“We can say that Korea has already slipped into a deflationary period,” Sung Tae-yoon, an economics professor at Yonsei University, told the Korea JoongAng Daily. “Although the Bank of Korea says it has carried out a monetary easing policy, the 2 percent benchmark interest rate is still not enough to boost the economy, when compared to other countries.”

Whether the BOK would lower the base rate below 2 percent varied among financial analysts in Seoul.

“While mortgage loans have been surging with the 2 percent rate, it would be difficult for the government to lower the interest rate below 2 percent,” said Park Hyung-min, a fixed-income strategist at Shinhan Investment Corporation. “Because there is no policy or system to curb excessive housing loans, if the central bank again attempts a cut in the base rate, it would likely result in a political dispute between the ruling and opposition parties.”

However, Kim Doo-un, an analyst at Hana Daetoo Securities, said an additional lowering of the interest rate was expected early this year.

“The decline in prices in February indicates frozen consumption in the country,” Kim said. “Decreased imports and exports also indicate a recessionary surplus.”