K-pop stars aim to please with gifts for fans

K-pop stars aim to please with gifts for fans 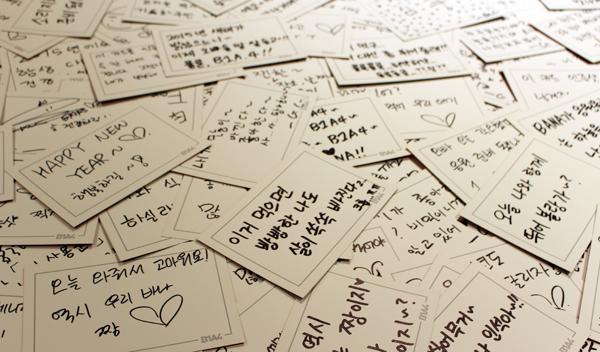 A total of 150 cards hand-written by members of the boy group B1A4 all include different messages for their fans. The cards were prepared along with 150 boxed meals and the same number of pouches of sweets for fans of the K-pop act who were invited to be part of the audience for a TV show the group appeared on. Provided by WM Entertainment


There was a time when blowing a kiss or giving a short greeting was enough to please fans. But it seems like today’s K-pop acts are doing more than just shouting “I love you” to impress their followers.

Apart from singing, dancing and shooting TV shows, young singers make time to handwrite letters, wrap up hamburgers and prepare chocolates during gaps in their schedules.

Most recently, B1A4 wrote 150 different cards for fans invited to cheer for the boy group at a shooting for the TV show “Idol Star Athletics Championships.”

Along with the cards, the five-member boy group’s agency prepared 150 boxed meals and the same number of snack pouches filled with sweets for fans who would be attending the show.

“All the members except Jinyoung came to the office, and each of them wrote about 40 cards,” said Yu Hae-na, the head of WM Entertainment’s public relations team.

“Jinyoung was shooting [for a drama series] on that day, so he wrote the cards between shooting.”

It would have been easier for the singers to hand out printed messages to their fans, but as Yu pointed out, “If the messages are all the same, it’s not fun at all.”

“Idol Star Athletics Championships” began airing in 2010 and has become an annual ritual for K-pop singers and their fans. The program always airs during the Lunar New Year celebrations, one of Korea’s main national holidays.

For the large-scale show, in which idol stars compete with each other in four sports - basketball, archery, futsal (a version of football with a smaller number of players) and track-and-field - thousands of fans of up to 20 different K-pop groups gather together in a spacious gymnasium.

Shooting takes place for two full days, beginning early in the morning around 8 a.m. or 9 a.m. and ending at around 11 p.m.

During the games, fans are not allowed to leave the competition venues and so bring their own food or are supplied with light snacks prepared by the participating celebrities.

Singers who belong to Cube Entertainment, such as girl group 4Minute and boy groups Beast and BTOB, ordered 450 hamburgers at their own expense. 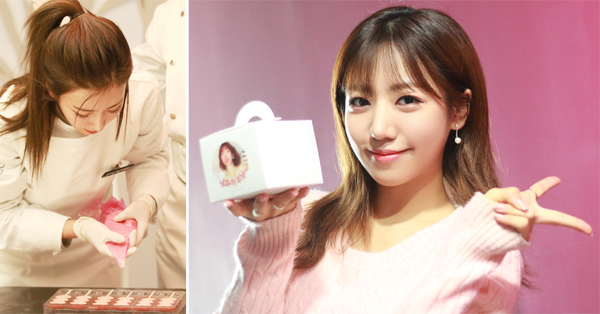 Apink often prepares drinks and snacks for fans. Apink’s Bomi, left, makes chocolates for the girl group’s fans and Namjoo, another member of Apink, right, poses for a photo while holding a snack box. Provided by A Cube Entertainment

The singers attached custom-made stickers bearing the logo “Cube Burger” on the outside of the brown bags containing the food.

In order to prove to fans that their favorite stars packed their meals, Cube Entertainment uploaded a series of pictures showing the singers attaching the stickers.

Tao, who participated in the annual TV show as a representative of his group, Exo, also handed out fried chickens, snacks and beverages to his fans, while Insoo, a member of the boy band My Name, presented boxed meals and hamburgers to his followers.

This kind of gifting from stars to fans has become the latest trend for K-pop singers.

Apink, the most up-and-coming girl group, made chocolates for their fans before Valentine’s Day last month.

The six-member girl band learned how to make chocolates from a professional chocolatier and selected the people who would receive the treats through a contest on Facebook.

Fans of the girl group wrote why they wanted to win the chocolates on their own Facebook pages.

“On Valentine’s Day, the girls had an event in Japan,” said Hong Ju-hee, an employee working at the fan marketing department of A Cube Entertainment, Apink’s agency.

“They wanted to do something for their fans and eventually chose to make chocolates,” Hong said, adding that it was not the first time for the members to come up with a surprise for their fans.

“They frequently prepare beverages and snacks for fans who come all the way to root for them,” Hong said.

Apink was the only girl group who achieved the feat of topping a weekly TV music show chart for three weeks in a row with its digital single “Luv” late last year.

Exo has the largest number of fan club members among all the K-pop girl and boy groups. Its official members reportedly added up to about 1.2 million as of last November.

Regardless of fandom, however, almost all singers, whether they are established or not, consistently express their gratitude towards fans.

Amber from the girl group f(x) recently handed out chocolates she prepared on the day of her first solo performance and sat down with fans for about an hour to have a chat with them and take photos together.

While it could be argued that this expression of love towards fans is genuine for many singers, some critics point to the competitiveness of the K-pop market as the reason for the new trend.

“This is telling us that the market for idol singers has become a lot more competitive than before,” said culture critic Kim Jak-ga.

“The K-pop market is already saturated because there are so many boy and girl groups, but it has a limited number of consumers.

“This means it is hard for singers to expand their fan base further. Therefore, the agencies and singers want to keep their fans by giving them feedback in these ways.”

With the help of smartphones and social media, this type of gifting from stars to fans also plays a role in the word-of-mouth marketing for singers.

During the two days of shooting for “Idol Star Athletics Championships,” fans filled web forums, as well as their Instagram, Facebook and Twitter accounts, with photos of the gifts they received from their favorite oppa or eonni.

In Korean oppa and eonni literally mean older brother and older sister, respectively, but are also used as terms of endearment for male and female stars.

Fans who received special treats from their favorite celebrities took pride in being a fan of a certain boy or a girl group.

“I can’t switch to another boy group because of the Beast oppas. They keep working hard for us,” wrote a blogger named Hadi as she uploaded a series of pictures of the boy group Beast packing hamburger sets that were prepared for fans.

“I’m proud of being your fan and I’m not going to change my love for you forever,” the blogger added.