Judges give magnificent Mercedes-Benz C-Class an A+

Judges give magnificent Mercedes-Benz C-Class an A+ 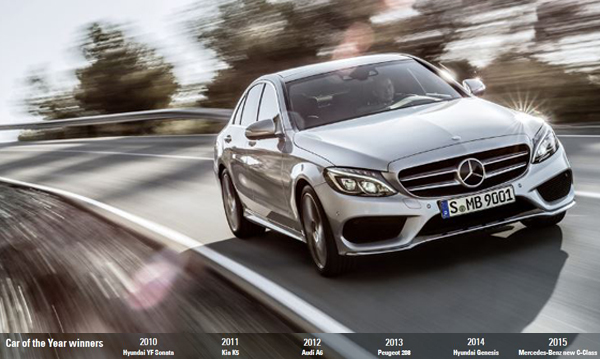 The new C-Class from Mercedes-Benz has been named 2015 JoongAng Ilbo Car of the Year (COTY).

“Bringing in two different concepts - luxury and dynamics - in design is a very tough job in developing a car,” said Yu Ji-soo, president of Kookmin University and head of the 14-member judging panel. “But the C-Class accomplished that last year.”

The organizing body of COTY announced on Feb. 23 that the new C-Class took this year’s honor and unveiled the winners for seven other categories.

Unveiled at the 2014 Detroit Motor Show, the new C-Class is the fifth generation of the model and its first makeover in seven years.

The car’s exterior earned it the nickname Little S-Class. It is a small sedan, but the C200 Avantgarde has a 1,991cc engine that produces 184 horsepower. 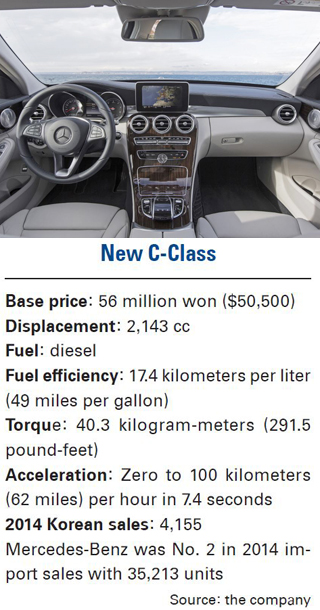 After it was introduced in Korea last June, 4,152 units were sold through December and 771 in January.

“It truly is a game-changer that can lead the industry,” said automotive columnist Na Yoon-suk.

“Previous Sonatas tended to appeal to customers with options, but it looks like the company is focusing on the basics with the LF,” said judge Kang Byung-huee, a racecar driver and official at Fiat-Chrysler Automobiles Korea.

In the Innovation category, BMW’s electric vehicle (EV) i3 took the honor, beating out Infiniti’s hybrid Q50. “The i3 certainly provided a standard for EVs, particularly in safety and high-end technology,” said Huh Seung-jin, head of the College of Automotive Engineering of Kookmin University.

After excelling in the high-speed test, Volkswagen’s Golf GTI won top honors in the performance category.

“This hatchback certainly proved its performance ability at high-speed and cornering in the track test,” said Jan Jin-taek, head of Car Media.

In the design category, the Sorento SUV from Kia Motors won in the domestic car sector, while the Jaguar F-Type coupe was top among the imports.

“Korea is the fifth-largest car producing country, but sometimes in the past it had been evaluating cars based on rumors or designs,” said Yoon Dae-sung, executive manager of the Korea Automobile Importers and Distributors Association, who participated in the event as a consultant. “But through this Car of the Year competition, consumers in the country are now able to review professional objective evaluations of new cars because the country’s best car experts carefully checked and experienced each vehicle’s features.”

The organizing body of COTY said all of the judges on the panel have been in the car industry from 10 to 30 years and worked hard of the past two months to provide accurate assessments for consumers.

When the first round evaluation, in which all participants held a presentation in front of judges, was held, the organizing body had a hard time managing schedules as the process took much longer than they thought.

The 2015 COTY award was the sixth competition.

After announcing the sweet 16 from among 66 candidates earlier this month, the list was narrowed to 12 finalists for the driving test that was held last week on the track at the Korea Transportation Safety Authority in Hwaseong, Gyeonggi. The award ceremony will be held on today at the Shilla Seoul hotel in Jung District.