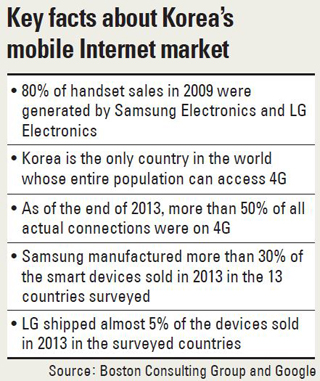 A report released by Boston Consulting Group and Google on Tuesday indicates how indispensable mobile Internet is to the daily lives of Koreans.

In “The Growth of the Global Mobile Internet Economy,” 60 percent of Korean respondents said they would rather forego coffee and alcohol than give up being constantly connected online.

Twenty percent chose mobile Internet over showering while 30 percent would prefer life without sex to life without constant access to the web.

The report, conducted by BCG and commissioned by Google, examines various aspects related to mobile Internet in 13 industrially advanced countries, including the United States, Japan, France, Germany and China.

The two companies jointly held a press briefing on Tuesday at Google Korea’s headquarters in which Ethan Choi, a BCG partner, presented a summary of the report.

The research predicted that the size of Korea’s mobile Internet market will be $40 billion by 2017 with an annual growth rate of 10 percent. It was valued at $28 billion in 2013, accounting for 2 percent of the country’s gross domestic product.

The expansion of the market in the country, the report says, will be driven by advanced IT infrastructure, Koreans’ affinity for digital gadgets and the growing popularity of mobile shopping.

The rise in online shopping via mobile devices will push the size of Korea’s mobile commerce market to $7 billion after growing by 15 percent annually, the report forecast.

“The mobile Internet economy has become a major industry ever since it was introduced five years ago, accounting for 2 percent of GDP,” said Choi.

“We anticipate it will grow more rapidly in the future.”

The report also highlighted the tech-friendly environment in Korea.

More than 73 percent of South Korea’s population of 50 million owns a smartphone, it said.

It also remarked that the nation’s Internet connectivity is advanced, stating “Korea is the only country in the world whose entire population can access 4G connectivity.”

As of the end of 2013, more than 50 percent of all mobile Internet connections in Korea used the 4G network while many other countries still use 3G.