Much hope pinned on headwinds from Galaxy

Much hope pinned on headwinds from Galaxy 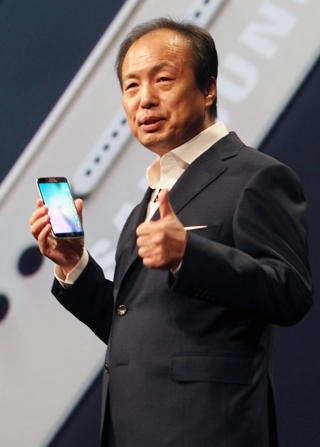 J.K. Shin, chief executive officer of the IT & Mobile Communications Division at Samsung Electronics, was supremely confident about prospects for the Galaxy S6 and Galaxy S6 Edge phones the company unveiled Sunday.

“Sales volumes of Galaxy S6 and S6 Edge will greatly exceed that of their predecessor [the S5],” he told reporters at the Mobile World Congress wireless show in Barcelona. “[Samsung smartphones’] market share is also expected to improve immensely.”

The two new premium smartphones to compete against the iPhone 6 and 6 Plus received “the best response” during the Unpacked event, the commander-in-chief of Samsung’s mobile division noted, adding a self-imposed assessment that those devices “represent products that only Samsung could make.”

The Sunday S6 unveiling event by Samsung was the first time the top smartphone vendor made a direct comparison of its product with an Apple counterpart on stage.

Shin noted that Apple made much more explicit comparisons between iPhones and Galaxies before.

Lee Young-hee, executive vice president for the mobile business at Samsung Electronics, explained alongside Shin that Samsung chose the comparison strategy this time to easily explain the new gadgets’ features, such as their camera and wireless charging, to the audience.

At the same time, Shin flatly denied some accusations that the S6 and its cousin S6 Edge have copied the look of the iPhone 6, the latest model from Apple.

“There are many smartphones out there made of metal or glass,” he said, “but the aluminum used in the S6 won’t easily be bent or scratched because it’s a material used in submarines and planes.”

The new Samsung smartphones feature Corning Gorilla Glass 4 on the front and back and metal frames, which are supposedly 15 percent tougher than metal used in other smartphones.

Lee said on the stage during the Unpacked event the “Galaxy S6 will surely not bend.”