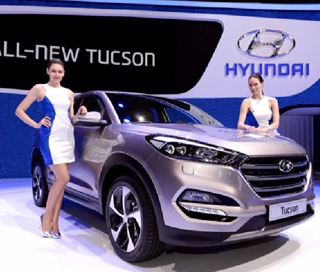 Hyundai Motor introduces the new Tucson SUV at the 85th Geneva International Motor Show on Tuesday in Switzerland. The model is the third generation and the first makeover since 2009. Provided by the company

Hyundai Motor unveiled the new Tucson SUV for the first time at the 2015 Geneva International Motor Show on Tuesday. The model is the third-generation of Tucsons and the first makeover since 2009.

The reason the nation’s leading automaker introduced the new SUV in Geneva is to expand its market share in Europe in the small SUV segment. Since the Geneva event is one of four major motor shows in the world held early in the year, it can set auto trends for the year.

It is the 85th Geneva show and a total of 220 companies including car and part makers will introduce about 900 cars and related products until March 16 in Palexco.

“We expect this all new Tucson can help consumers in the world recognize Hyundai Motor as a global premium brand,” the company said in a statement.

The model’s predecessor, the Tucson ix, was the best-selling SUV in the European market for Hyundai Motor with 94,166 units sold.

For the exterior, Hyundai Motor’s signature hexagonal grille has been added along with LED daytime running lights. The model also offers some safety options including auto emergency braking and smart parking assist systems.

Along with the new Tucson, Hyundai Motor will display 16 cars including the i30 turbo hatchback and four engines at the motor show.

The automakers in Geneva are focusing on introducing more cars that consumers will actually consider buying rather than fancy and expensive supercars. This year, small SUVs, wagons and coupe models as well as environmentally friendly cars will attract visitors.

Among the 900 cars being displayed in the show, about 130 are models newly introduced to the European market. The market is of interest to global automakers because it is showing signs of economic recovery thanks to the European Central Bank buying of eurozone bonds as a form of quantitative easing.

Hyundai Motor’s sister company Kia Motors introduced concept car KD-11, a grand-touring wagon. The model was interesting to industry insiders because they expect that part of its exterior design will be applied to the company’s second-generation K5 sedan that will be unveiled for the first time in Korea in the second quarter of this year.

Ssangyong Motor displayed its SUV lineup in the show. Its main model is its small Tivoli SUV, which has been riding high in Korea since it started selling in mid-January. Ssangyong received more than 10,000 orders for Tivolis in two months.